A Farm Scene For The Green Mountain Division

Filling A Corner With A Farm...by Don Janes

A while ago George posted some photos of a corn field on my layout that I had recently finished.  That field is part of a new farm scene I have been working on it for quite some time.  I can say now that I think the scene is near completion. I had a fairly large empty corner to fill on my layout and decided to create a farm scene since there are lots of farms in New England.  There is a scene a little further down the line that depicts a pasture and a farm in the distance represented by a photo of a barn behind the trees but this new scene is an actual farm yard. The farm is set on a higher piece of ground with the railway tracks running through a cut in front of the farm.  Behind the barn is an old wooden road bridge that helps bracket that end of the scene. Structures include a farm house, barn, garage, hen house, windmill and a small shed full of tools and supplies.  The background is a photo backdrop I got from SceniKing (now out of business) Actually it is just one photo I made copies of and glued to the wall. Although it is all the same photo I tried to vary the height and orientation to make it look different. Also, there will be trees in front of it here and there to break it up. 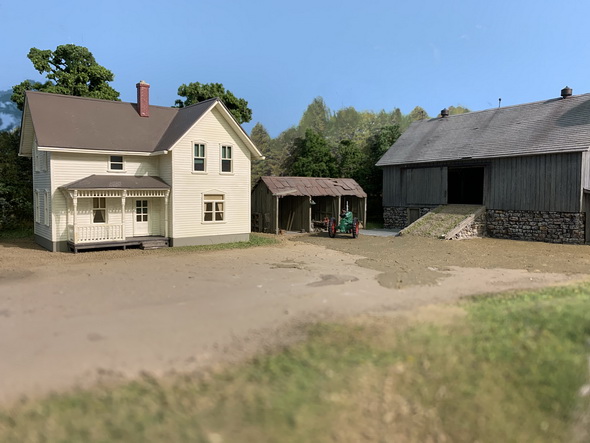 The structures are from the following manufacturers.
Farm House, Silo, Hen House (laser wood kit, out of production) - Walthers
Barn - Sylvan Scale Models
Windmill - Woodland Scenics
Garage and small shed - Fine Scale Miniatures (from Crocker Bros. feed mill kit)
Once the structures were set in place a basic coat of scenery was added.  I built up the scenery in layers as I went along, adding dirt for the driveway and farm yard, various ground covers for the greenery and static grass and then bushes.
Not having any farm experience I am sure I have missed some details but can add them as I learn what else would be found around the farm yard.  So far I am happy with the way the scene is developing.