A recent e-mail from Model Railroader had a great photo taken by Don Janes. Don's photo is the current MR desktop wallpaper download...nice work Don...George Dutka
Posted by George Dutka at 07:23 No comments:

Story by Peter Mumby
Photos and Captions by George Dutka

Monday June 25 was the date of the most recent Rapido dealer open house - the day had been circled on our calendars for at least the six previous weeks.  As usual, we packed a lunch, as a full day had been planned.  We decided in advance that, on the eastward trip, we would avoid the multi-lane highways as much as possible.  Accordingly, we followed county roads from Ingersoll to Hamilton, then from Hamilton to Mississauga.  The final leg to Markham would take us over the 407 toll route.

As normal, our day would involve a three-pronged program - railfanning, hobby shop visits, and the open house itself.  The day dawned with a cloudless sky, so we were optimistic about the railfan photography component.  Unfortunately, the trains proved to be almost as scarce as the clouds.  However, we both enjoy photographing rolling stock, so this was our saving grace at Ingersoll and Beachville.  We were reduced to shooting vehicles at Paris, and our time at Copetown was devoted exclusively to eating lunch.  Our best location turned out to be Hamilton's Stuart St. yard.  Here we caught a CN mainline freight and a Southern Ontario transfer job.  We were glad to see SOR in action, as this yard work is scheduled to be taken back by CN in 2019.

We visited two hobby shops en route.  Paris Hobbies featured a sale table with a few items which ultimately proved irresistible.  We were able to resist temptation at Credit Valley, but while we were there the large TV screen featured a live Jason Schron podcast from Rapido Trains, so we were apprised of the new product announcements before we arrived in Markham.  An N-scale CN Dash 8 unit and an HO RS-11 were introduced.  A group of CN and CP RS-18s would feature the rebuilt Tempo train units.  The real surprise was that the Tempo passenger cars were to be produced to accompany the locomotives.

As usual, we were made to feel comfortable by the pleasant and knowledgeable Rapido staff at the open house.  Questions were answered, stock was perused, and an excellent barbecue supper was enjoyed.  The highlight for George and myself was that the ex-TTC GM fishbowl Rapido bus was on site, with short rides available.  What a flashback to the 1970s!

The trip home was quick and pleasantly uneventful.  We are already considering plans for next June.

By Peter Mumby
Ontario Northland Railway went out of the way to ensure that railfans and patrons could identify its flagship passenger train, the "Northland."  This train had travelled from Cochrane to North Bay via the ONR Ramore and Temagami Subdivisions.  Upon arrival at North Bay the train backed onto the North Bay/Capreol segment of the Newmarket Sub in order to access the CN station. With its station work complete the train will return to the CN/ONR junction and head south on CN trackage towards its eventual terminus at Toronto Union station.

ONR 1985 was an FP7Am, originally built by GMD in 1953 as FP7A number 1518.  It had been modified to replace one of the original TEE train power cars.  It now incorporated an alternator for auxiliary coach power, and was semi-permanently coupled to a 3-car TEE trainset.  In this August 1986 view the unit is receiving a little individual attention from ONR personnel prior to resuming its journey.

Quite a bit has changed since this photo was taken.  ONR subsequently built a combination train/bus depot on its own line, as CN made the decision to abandon the mp 227 - 311 portion of the Newmarket Subdivision with the exception of a small segment in the Capreol yard.  Now this relatively new facility serves bus passengers only, as the Northlander has been relegated to the history books.  The only remaining ONR passenger train is the Polar Bear Express which operates between Cochrane and Moosonee. 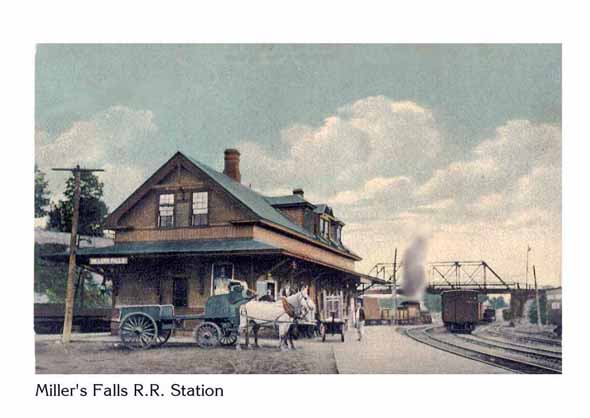 Posted by George Dutka at 10:49 No comments:

This is the second post today as I am away in the morning with Peter Mumby to the Rapido BBQ and dealers open house. Posts as you may have noted are a bit inconsistent this month as I have been up at the lake a bit and with no internet, so no posts. A couple of double post days helps keep the post count up. Will see how it goes next month but I am thinking hit and miss most weeks. I do have a few Wordless Wednesdays laid out and a few posts from Peter to share. I am looking at covering a few structures I completed a few years back that have yet to make it into the blog. Guessing the next post might be an update from our Rapido visit...George Dutka

Earlier this month I took the last of the Gord Taylor slides that I plan to copy up to the lake. On a rainy day I scanned about 180 more New England and Canadian views. This is a drop in the bucket of what Gord had taken over the year. I may have scanned 400 views but his collection is in the 10's of thousands. Peter has kept what he thought he might like to file away in his own collection and has sold somewhere between 10,000-20,000 of Gord's slides to a US collector that will be putting them up for sale...you might want to watch on line for many more of his views. I have yet to scan any of his prints which I have a large box full of...George Dutka

Here is a look at my new drop-in station along the White River Division. The location is the site of the BEST Elwell general store kit. It is closed as a service station but still in use for auto repairs as seen through the open garage door. You will get a closer look in the door shortly...George Dutka

Many of the air slides in Canada was used in shipping sugar. One, the Redpath hopper had a custom decal made for it years ago. It is a hard decal to apply as the captions will tell you. For the second side I just made a billboard from a colour photocopy of the logo and attached. I think this looks way better. The numbering decal which is printed on a better type of decal paper works well...George Dutka 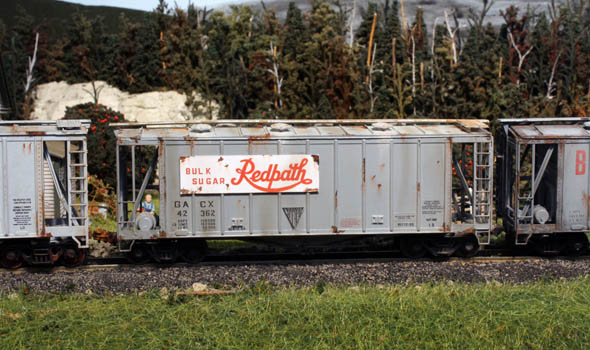 
A very simple way for a hopper to be loaded on any siding and a great modeling project that one can use anywhere on the layout. 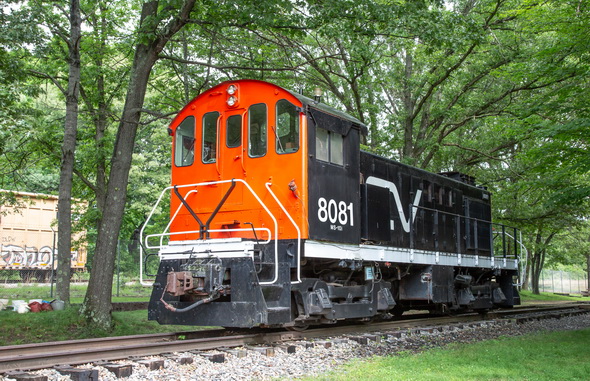 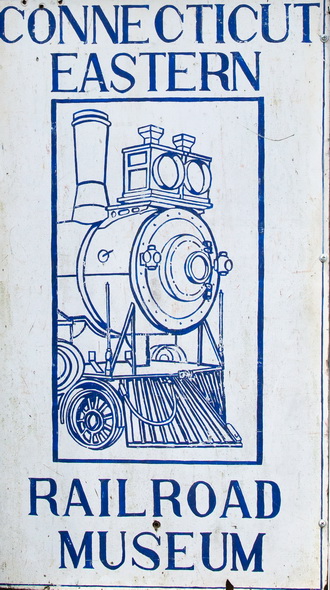 While attending the Enfield RPM meet on June 2, Bill Moore and I ducked out of the show on Saturday afternoon and headed over to Willimantic to visit the Connecticut Eastern Railroad Museum.  The last time I was there with George in 2014 while attending the Collinsville, CT RPM meet we stopped by on a Friday only to find the Museum closed, being open only on weekends.  This time we made sure to visit when it was open.  We were two of only about 10 visitors so we had the place pretty much to ourselves for photography and browsing around.
There is a very nice new brick six stall roundhouse built on the original footprint of the old New Haven structure.  Inside was a fully restored Central Vermont USRA wood caboose #4052 still waiting to have the correct lettering applies. Also inside was a CV long wood caboose in terrible shape, hopefully on the list for restoration in the near future and an old CV wood boxcar in pretty good shape. This is where restoration work is carried out.  It was interesting to see some of the original brick lined inspection pits still preserved.
Just as we arrived they were running an old EMD SW8 which had just been fired up that day. It sounded really good. Wondering the grounds we found quite a few exhibits in various states of repair.  Being a volunteer organization progress is limited to the amount of time people can spend working at the museum.  There were several old railroad structures that had been moved to the museum and restored to excellent condition with displays inside.  There is also a working turntable with the original stone block pit used for turning equipment.
While stepping into the roundhouse, just as the heavens opened up with a torrential downpour I met long time museum volunteer Art Hall, who by the way follows this blog.  Art was very knowledgeable about the museum and northeastern railroading in general.  He gave us lots of information about the museum and the history about the surrounding area.
I am glad I finally got to visit the museum when it was open.  The volunteers are doing a great job restoring equipment and making this a great place to visit.  The following photos give an idea of the various equipment and structures at the museum. 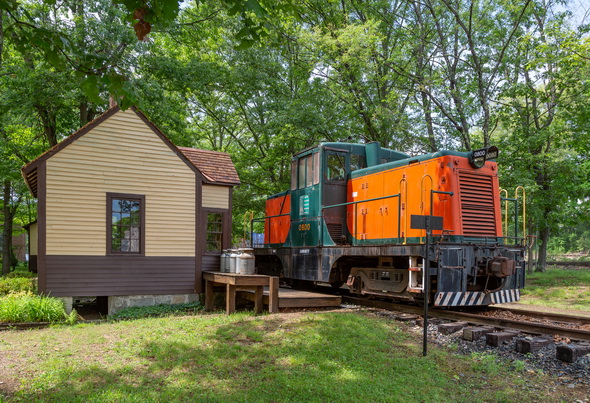 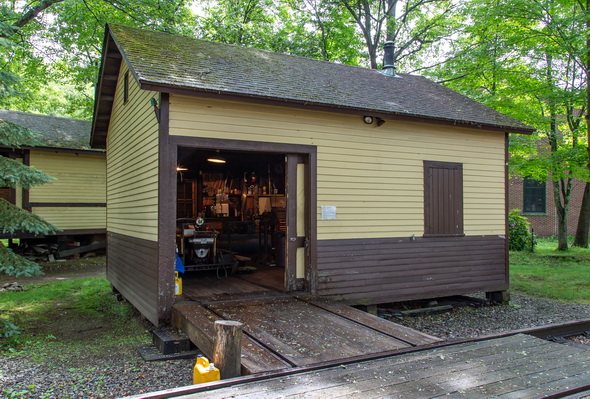 Bruce Douglas sent me this view of a trio of New England power handling a westbound train at Port Hope during November 1966. Although not that clear of a photo it is neat to see. The power is CV 4927 leading followed by GT 4450 and a DWP RS-11 now assigned to the CV...and all in the classic green and gold...George Dutka
Posted by George Dutka at 08:36 No comments: