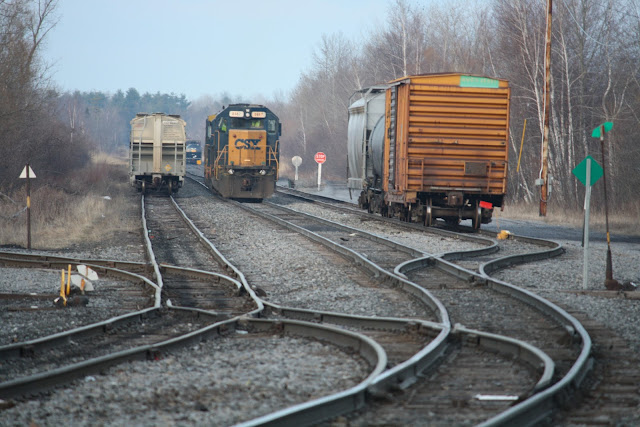 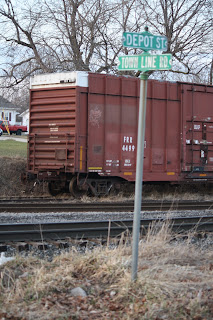 One of my stops this spring following the Ogdensburg and Lake Champlain was Norwood, NY an  interchange location with the NYC. At one time the town hosted two stations, a NYC roundhouse that was used by the Rutland Ry also, a Rutland Ry coal tower and a good amount of yard trackage.

Currently the CSX pass through town and interchanges with The New York and Ogdensburg Railway Co. I did not find much evidence from the past but I did see a CSX train pull into town from the east, cut off and park it`s power in the middle of the yard which is not accessible to viewers. These few shots document my short visit...George 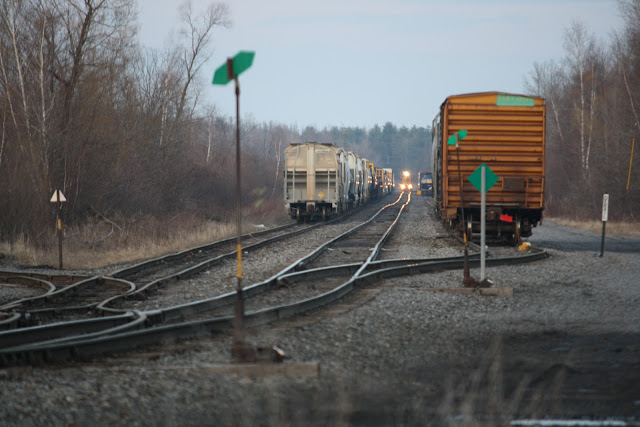 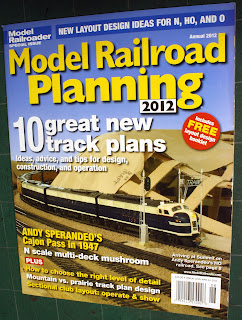 About a month ago I picked up the 2012 MR Railroad Planning, a special feature of Model  Railroader magazine. The current Model Railroad Hobbyist Magazine has done a review on the web of this special issue magazine.You might want to take a look.

Bernie Kempinski's O scale Civil War layout is featured. I had a chance to see this layout in person last fall and I was really impressed. A link to Bernie's layout is in my blog list seen to the right of this feature.

Since I have Photoshop I was interested in the article by Jim Six which explains test fitting structures.

For me the highlights of this issue are two features. One by Paul Dolkos that highlights the inside perspective or a different viewpoints for a layout. The other is expanding a layout potential by Mike Confalone. Mike is a New England modeller, and his scenes are very inspirational. As I am a barn lover...the scene with the curving road, the train in the foreground and the barn up on a hill really hits the heart of what rural New England is all about.

From my point of view a barn built with little else around makes a great layout scene. This is how I see rural New England. One should consider adding a similar scene when planning a New England layout. Seen below I came across two structures surrounded by fields and meadows that gives one additional inspiration for future scenes. Trains in New England should run though small pockets of structures, such as a mill town and lots of open space. The open space is what makes the train the focal point of the scene and pleasant to view...till next time...George

On Thursday morning I could hear our water heater making funny noises. When I went down to check there was a stream of water heading from the bottom of the heater to the drain...the drain being in my layout room which is on the other side of a wall from the heater. The layout was fine but all my sailboat gear that is stored during the winter under the layout was wet. So now this stuff is scattered all over the basement till it drys out.

I thought that would be the wost of it. When the gentleman arrived to replace the heater, right off the bat he mentioned the gas heater's exhaust needed to be replace also. Well the exhaust runs overhead through my layout room and out the wall just above my WRJ staging yard. This is at the same location as my coaling tower. He also pointed out...that area of the layout will have to be removed to access the piping. I just laughed as that was not going to happen. I had not put up a ceiling over my layout since there is a lot of piping, valves and wiring that over time will need looking at. It is covered with heavy plastic which I stapled up. We came to an agreement that he could work off a ladder that I use for track cleaning and maintenance on the layout once I remove my rolling stock, details and structures from the area. I had about 40 minutes to do all that since he was going to haul out and bring in the new water heater and install it first. The piping went in well and the only damage was some flattened tree hills since I covered the area with a drop sheet. A lot of details and buildings also need to be replaced.

I normally shut down operations in mid April and store my rolling stock in a large display case for the summer season (keeps the dust off when not in use) plus block off the entrance to keep the dust out of the layout room. There is no door to the layout. Well the shut down is happening earlier this year. I had planned to redo the foreground area of WRJ this spring and summer when not at the lake. This will just start earlier than planned.

Lesson learned...you might want to keep your layout as far away from the furnace, water heater and floor and overhead drains as possible. If you are putting up a ceiling...make sure the access to anything important in the future is not above your bench work. Oh if you think your water heater is new and will not give you any problems, the longest they last is 10 years and if your a lucky guy, more than 5 years...oh did I mention my furnace is within 5 years of replacement...guess where the piping goes...George
Posted by George Dutka at 14:05 No comments: