Today the WRD blog moves into its 10th year. It is hard to believe it has been anywhere near that long. My layout is into its second redo in that time and the Bellows Falls yard has been finished. When I first started this blog the WRD was loop trackage with hidden staging and has grown into a point to point layout...a loop addition might be in the long range future.

I have to thank both Peter Mumby and Don Janes for their help with many interesting posts over the years which gives the blog variety of topics, not just a look at the WRD. There is a lot more to come so please check back regularly. Oh one more thing, this coming year will see the blog hit the one million page view...maybe that one might be you...leave a comment if it is.

Happy Halloween from the WRD...George Dutka

A B&M Trailer at Westboro


The Athearn trailers come in two packs. One was used in Bellows Falls while the second is found behind the Westboro sandhouse...George Dutka 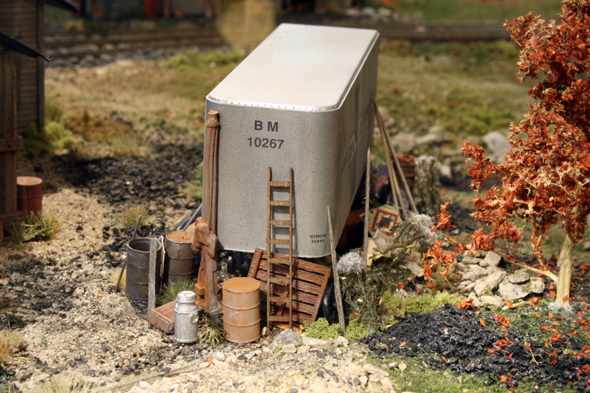 Posted by George Dutka at 08:20 No comments:


By Peter Mumby.
Three CP business cars were in attendance at the 100th Anniversary celebrations for the Village of Havelock.  (See August 16, 2018, "Celebrating 100 Years in Style").  Each of these cars had been constructed in the 1920s.  CP 70, "Assiniboine," was named after the Assiniboine Tribe in Western Canada.  CP 73, "Mount Royal," had been named after Montreal, the original home city of Canadian Pacific.  Car 83, "Lacombe," had been named in honour of Father Albert Lacombe, who had negotiated a right-of-way for the railway through Blackfoot lands.  Built in 1921, Lacombe was the oldest member of this group of veteran business cars.
CP "Mount Royal" was built in 1927.  It still looked pretty classy on July 04, 1992.


A couple of views that I took following a train from the Strasburg museum back in 2016 when Don Janes and I attended the Fine Scale Expo in that area...George Dutka 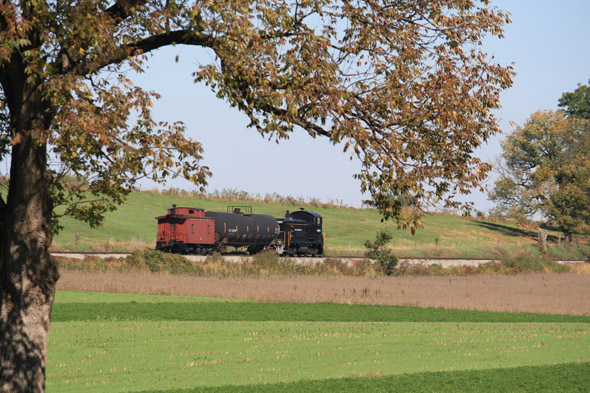 Posted by George Dutka at 08:06 No comments:

While posting today's entry I by mistake deleted my weekend post on how to built the shack. I have re-posted it once again similarly to what was originally seen.
The FOS soda shack was a pretty easy build. The free kits do not come with instructions but the part assembly is pretty straight forward. On line FOS has posted a good number of photos to work from. These additional photos should help one if this kit is on your new kit shelf...George Dutka 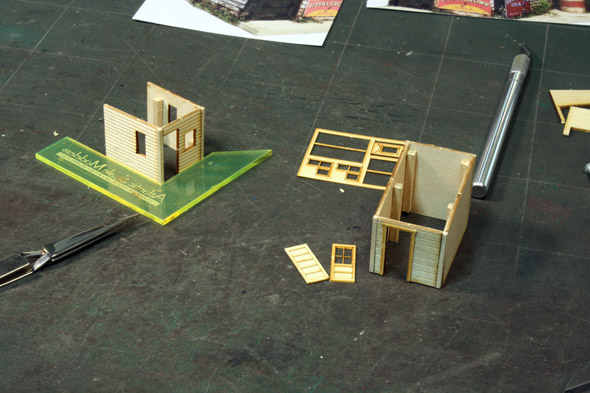 Posted by George Dutka at 11:38 No comments: 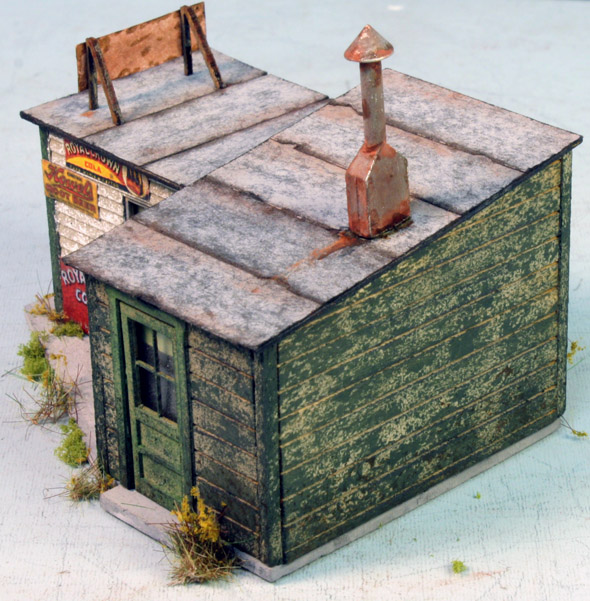 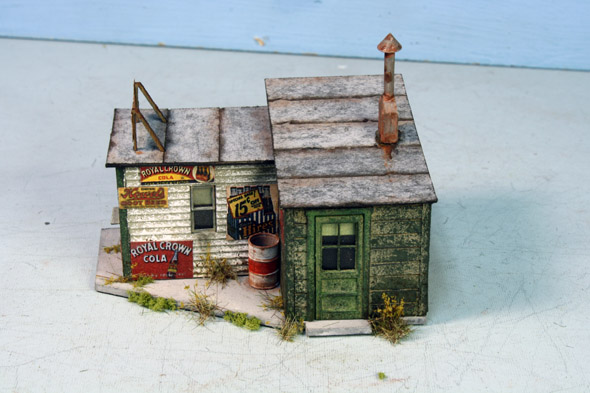 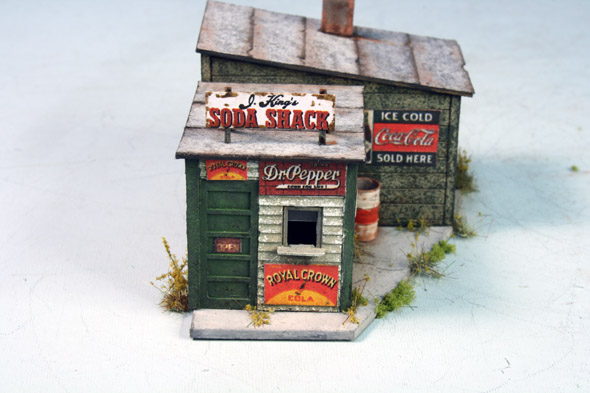 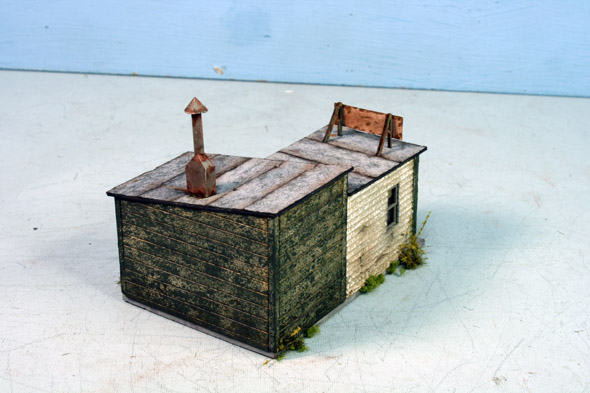 Posted by George Dutka at 08:26 No comments:

Last weekend I contacted Don Janes, Jim Sloan and Peter Mumby about meeting up at the Sarnia VIA station for a social distancing get together. Peter could not make it. So on Monday I followed the CN main line from Strathroy to Sarnia in the rain. I did catch a CN EB at Kerwood. Once at the VIA station most of the action was transfer jobs coming and going out the CIL spur behind the roundhouse. We did photograph two of the three movements. I guess we should have met in the wye area as we did not see any mainline runs through the tunnel. We each brought something to show and tell...so a mini RPM meet of sort. We might be able to squeeze one more in before the snow gets heavy this year...George Dutka

Posted by George Dutka at 22:30 No comments:


This is what one gets in a FOS free kit...George Dutka 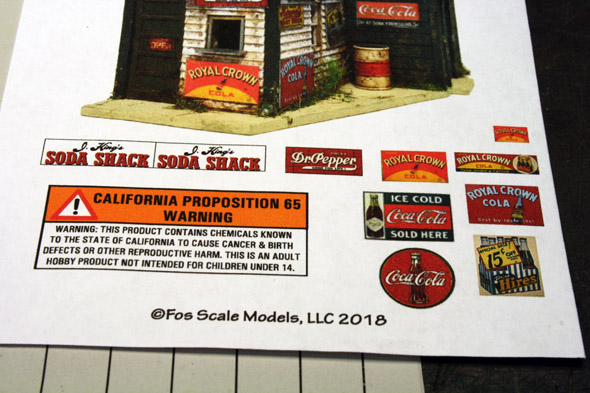 Posted by George Dutka at 08:37 No comments:

Throwback Thursday - A Face Only a Modeller Could Love (Part Two).

By Peter Mumby.
Back on August 27 of this year I referred to the small 5447-5449 group of SD40-2 locomotives that CP leased from NRE and later purchased outright.  Like the 5449 featured in that post, 5448 arrived on the property wearing an unadorned coat of primer grey paint.  The cab side had the unit number and, at various times, either a hand-lettered "CP" or a stencilled "CP Rail."  When applied later, the StL&H logos actually added a little character to this pair of locomotives.
5448 and 5449 differed in a number of small details, but the major identifying feature of the 5448 was its lack of a dynamic brake.  This may have made the unit unique as far as CP's large roster of SD40-2 locomotives was concerned.  5448 had been owned by MP as its 3130 before being acquired by NRE.
StL&H 5447 had previously been identified as CNW 6910.  It entered service on CP in an uninspired coat of primer red paint with only its new road number and a stencilled "CP Rail" on the cab side.  Somewhat later a crudely drawn "CP" was painted on its flank.  Mercifully this was eventually covered with the StL&H logo that appears in the accompanying photo.
Posted by George Dutka at 09:06 3 comments:

On Oct 7 my wife and I headed up to Northern Ontario to take in some of the fall colours in and around Algonquin Park. We stayed in the town of Huntsville and took day trips to different areas.  The day we left was overcast an rainy but we soldiered on hoping the weather would break.  Our first stop was the small village of Washago, a once busy railroad junction. It is still a junction but a majority of the trains traverse the CN Bala Sub between Toronto and Capreol and points west.  The line to North Bay is still there but sees very limited traffic, only one train a  day and a switcher out of Huntsville on the Newmarket Sub which used to go all the way south to Toronto but now ends at Washago. There is still a section between Barrie and Toronto used by Go transit.
The reason I stopped at Washago was to get a few photos of the old concrete coal tower that still stands there.  Last time I was there I was apprehended by the CN police for walking on railway property so this time I was much more careful.  As we arrived at the coal tower the sun came out so I took several photos.  We waited a short time but no trains came so we headed up to Huntsville. 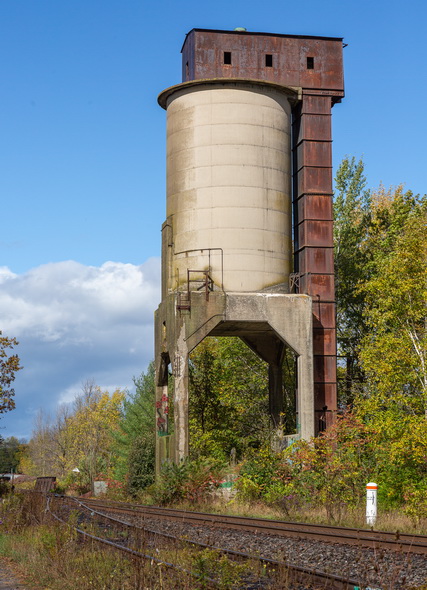 Our next stop was at the old CN Huntsville train station which is used for something else now since no passenger trains call on Huntsville anymore. It was getting late and the clouds were moving in again but I managed to get some photos of the CN locomotive assigned to the roadswitcher out of Huntsville. 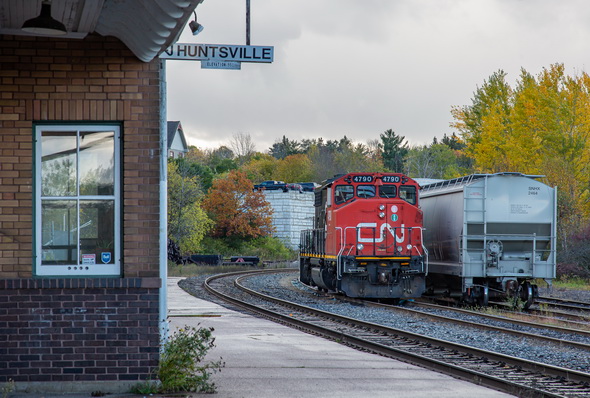 The next day we spent touring around Algonquin Park, one of Ontario's most famous Provincial Parks.  The scenery was awesome and it was a great day. Last year we camped there but opted for a hotel this year.
On Oct. 9 we headed over to Parry Sound.  After some shopping we headed out to one of my favorite railfanning spots, Lawson Bay Road where the CN mainline passes along a nice little lake. I have never been there in the autumn so was hoping the leaves would be colourful and I was not disappointed. It was cloudy but the colours were still nice and there were no harsh shadow like on a sunny day.  It wasn't long before a northbound CN freight train came around a curve and into view along the lake.  It had on unit on the front and a DPU in the middle. 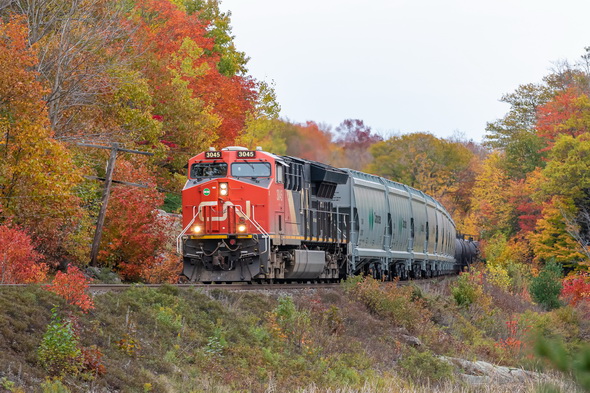 As we sat by the lake drinking coffee and enjoying nature we heard a rumble in the distance.  It is hard to tell if it is a CN or CP train as the CP tracks are not too far away.  A few seconds later the crossing bells started and another northbound train came into view.  This time a heavy intermodal train headed up by three engines. After this train passed we packed up and headed to Mactier, a CP division point about twenty minutes south.  I wanted to try and get there while we still had fairly good light in case we were lucky enough to see a train there.  On our way we saw a third northbound CN train at Dock Siding.  I didn't get a shot but it was another heavy intermodal train. 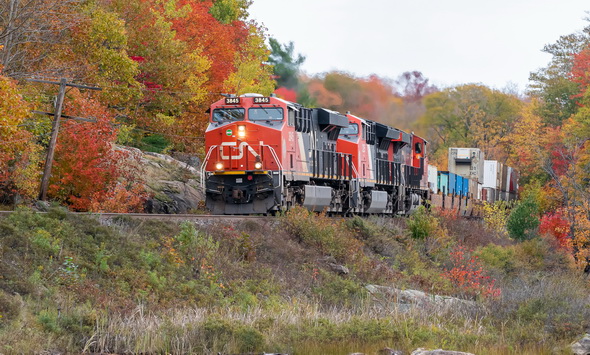 After the second CN train passed we headed to Mactier, a CP division point about twenty minutes south.  Mactier used to have a large yard and roundhouse but today has only a few yard tracks and a small yard office for incoming and outgoing crews to use.  There was some MOW cars sitting in the yard so I grabbed some shots. A few minutes after we arrived a northbound CP container train pulled up to the yard office and stopped to change crews. Within 10 minutes they were on their way again.  It was a very long train with one unit up front and another DPU about mid way back in the train.  Once the train cleared we headed back to Huntsville taking in the beautiful scenery as we went. 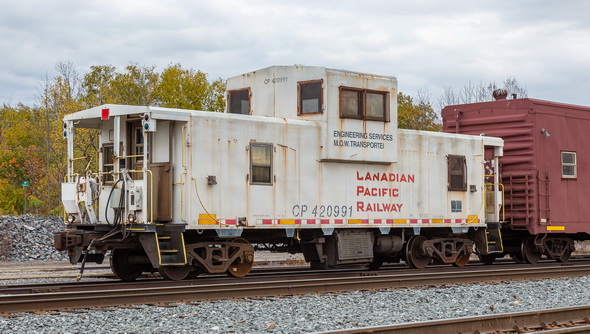 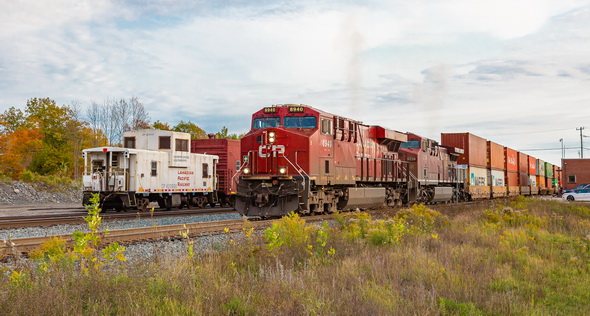 On Oct.10 we headed for home, making a stop in Barrie to visit out daughter and granddaughters.  We made one final stop in Palmerston, a once busy CN terminal that now has no rail service but there is a small steam engine on display and the the station is now a Museum. Unfortunately it was closed account the Covid19 pandemic.  The old CN steamer #81 had just been repainted and looked great.
It was a great trip and it was great to get away after spending months sticking close to home. Hopefully next year the world will be in a better place.