By Peter Mumby with photos by George and Peter

The original weather forecast for Monday June 26 was for a mix of sun and cloud with a possibility of late afternoon rain, especially in the Toronto area.  By the time the actual day dawned, the prognostication had been upgraded to a probability of heavy rain in the afternoon.  Skies were still bright when we departed London at 08:30, but clouds were obviously building to the east.  Our original plan had been to make several railfan stops en route, but we decided to alter our plans to take advantage of the sunny conditions close to home.  As such, we ended up spending a couple of hours in the Ingersoll/Woodstock area.  We watched a pair of Ontario Southland SW1200RS units switching at the Cami plant, and chatted with the crew of the OSR Woodstock turn.  Shortly afterward we followed the turn (OSR FP9 1400/GP9 1620) to Woodstock, with photo stops at Ingersoll, Beachville, and Carew.  From there, it was a straight run to our lunch stop in the Campbellville/Guelph Junction area.

Following a quick stop to check out the old Milton station, we were off to make a hobby shop detour to Credit Valley.  Last year we had found some really good deals there, but this year we left without too much wear and tear on the credit cards.  It seems that the hobby has become the exclusive domain of the $50 freight car and the $350 locomotive.

Shortly after we got on to the 407, the deluge started, slowing traffic to a crawl.  We were glad to finally leave the highway at our exit, and pulled into the parking lot at George's Trains.  Disappointment number one - as it turned out, the store is closed on Mondays.  Oh well, by then it was 4:00, and we could head across the street towards the Rapido parking lot and look for the Rapido bus.  This was the ex-TTC GMC Fishbowl bus that became the prototype for the soon-to-be released HO scale model.  Disappointment number two - the bus was a no-show, MIA due to a wonky turn signal.  Guess we'd have to limit ourselves to the indoor activities.

The Rapido staff was out in force for the day's festivities.  As usual, they were friendly, helpful, and informative.  George cornered Dan Darnell and got a lot of helpful information about using the new Rapido paints.  In addition to speaking to the Rapido staff about available and upcoming products and deals, we were able to visit with the local ESU LokSound representative Bob Fallowfield. Also present was the designer of the Rapido Rail Crew switch machine.  He was telling us about a new layout project being designed for the museum in Southampton.

On display were pre-production examples of many upcoming  models, including the CN Dash 8 and the cylindrical hoppers which hopefully will hit dealer shelves by this fall.  Also nicely displayed were many of Rapido's smaller detail parts, along with their full "swag" line of hats, t-shirts, and mugs.

Scheduled for this open house was the Big Announcement of three new upcoming projects, two in N scale, and one in HO.  Jason began with with the N scale items, namely a New Haven passenger car and the Turbo Train.  The big surprise for us was the announcement of an HO scale model of the SW1200RS, the iconic Canadian small road switcher of the late 1950s produced by General Motors Diesel.  Under development now for almost two years, word is that Rapido may have these available by early 2018.  Apparently, Rapido researchers have made numerous visits to the Salford/Ingersoll area, crawling over those very units that we had watched working the Cami yard earlier in the day.  At any rate, this was an announcement that will likely be welcomed by many CN and CP modellers.  Ironically, production of this same model was announced some time ago by True Line Trains,  so it will be interesting to see how this all plays out.

As with last year's event, both of us enjoyed both the Rapido experience and the other components of the day.  We're already making plans to attend next year's open house - after all, we still want to go for that bus ride!

Posted by George Dutka at 07:56 No comments: 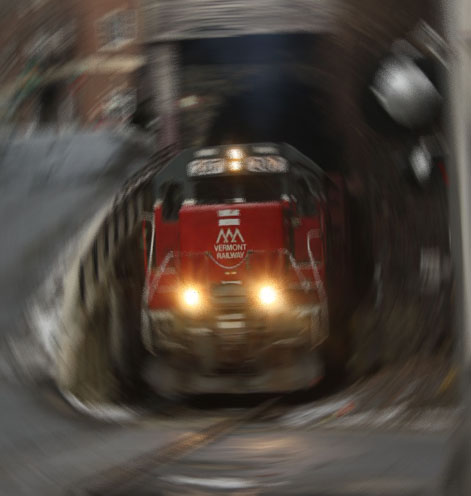 Bellows Falls on the WRD

Here is a view I took recently of Bellows Falls on the WRD. Since then the rolling stock has come off and the decades have been moved ahead for summertime operations...George Dutka
Posted by George Dutka at 16:55 No comments:

If one is looking at modeling an abandoned or not in use structures, boarding up the windows is a detail one is looking at replicating. At this years NFR convention I noted a few windows boarded up on a structure displayed by Imagine That. I asked the company's model builder how he did it. The building being laser cut brick into wood he simply turned around the window cutouts and installed. The backside is smooth and actually looks a lot like plywood. He also adds some stained nail markings which really adds to the effects.

In the current issue of Model Railroad Hobbyist magazine there is an article by Barry Silverthorn who boards up a Walthers station using vernier card material from Lee Valley. It is a thin maple 2" X 3 1/2" sheet used to make novelty cards. Being thin it would be pron to warping if stained or paint is applied. One would have to consider PanPastels or powders to replicate weathered plywood...George Dutka

In this post we find the finished views of my sand tower diorama. As mentioned before it is made on an off-cut Styrofoam piece. This diorama will be used to display my steam engines that don't run anymore or just need to be displayed...George Dutka

The Outside Collection....by Don Janes

After I spent time browsing the indoor exhibits I started strolling around the grounds at Exporail. There are a surprisingly large number of track throughout the grounds and a varied collection of equipment.  A lot of the pieces were starting show some heavy weathering and rusting.  Much of it was more "modern" than what is on display inside. I am assuming this might be more recently acquired equipment or pieces they feel are still in good enough shape to be stored outside until such time they are restored.   I also think they are out of any more indoor storage facilities. There is also another large building, the one I remember from my last visit to Exporail, which has a very nice collection of well preserved equipment.  It was quite dark and aisles were very narrow so I didn't try to take many photos in there. Some of the more noteable items were a CPR 2-10-4 Selkirk, CNR 4-6-4 #5702, CN 4-8-4 #6153, CNR 4-6-2 #5550 and a very nicely restored CPR MLW switcher #7077 and C424 #4237.
Exporail also has a few diesels that have been restored to working condition that they use to pull coaches up and down a short stretch of track.  These include a beautifully restored CNR 1200RS #1382 and a rebuilt CPR GP-9 #1608.
Hopefully in the future they will be able to raise enough funds to add another exhibit hall and get the remaining rolling stock restored and put inside out of the weather.  The folks at Exporail have done a fabulous job on the museum.  It is a "must see" stop for anyone interested in railway history who is in the Montreal area.  I know I am really glad I took the side trip from Ottawa to Montreal to take it in. 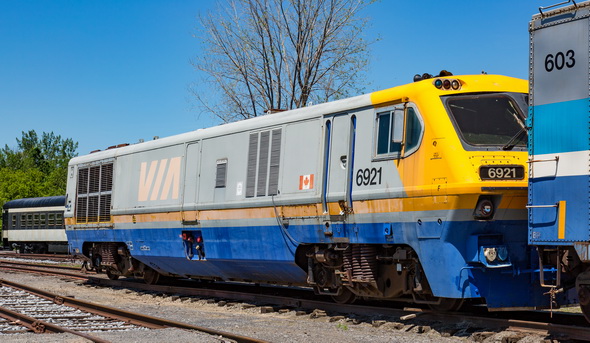 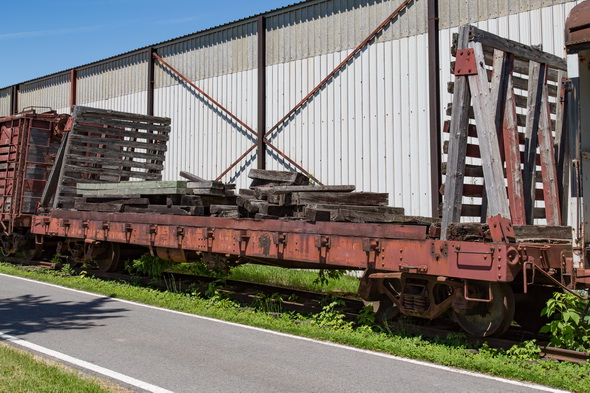 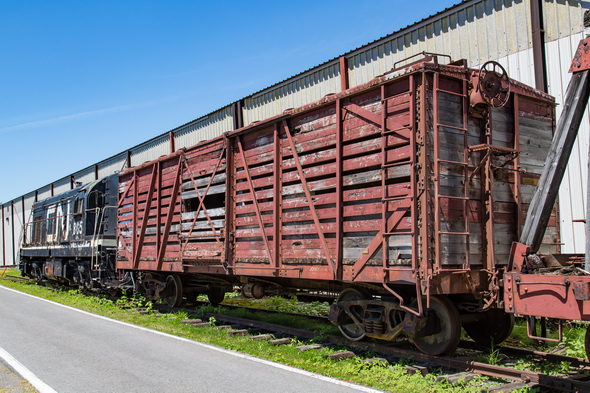 Posted by George Dutka at 00:15 No comments: 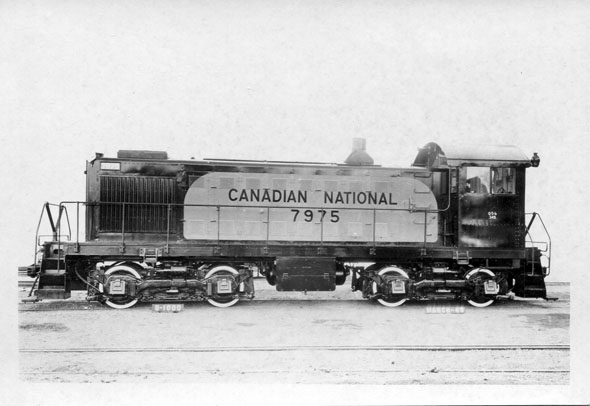 Posted by George Dutka at 14:59 No comments:

The Inside Collection - Part 2....by Don Janes

As one continues to stroll through the huge indoor display at Exporail you keep discovering new and unique pieces of equipment.  If you were to read evey information plaque and go through every open car you could easily spend several hours just in the "Great Hall". For anyone who has not visited Exporail I highly suggest you add it to your "to do" list.  It makes for a great outing.
So, lets continue our tour and once we get through the indoor collection we'll head outside to see what they have on display there. 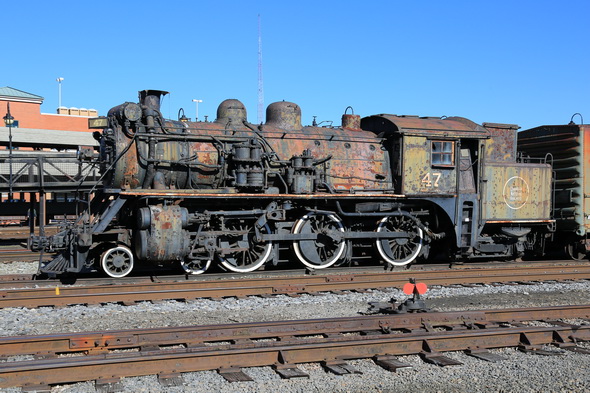 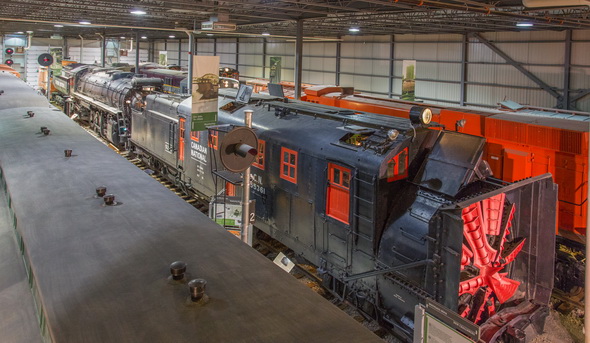 Posted by George Dutka at 09:08 No comments: