North of White River Jct. along the Connecticut River line one finds a small section house that Creative Laser Design has made a model of. I have seen very similar section houses here in Ontario on the CPR. I purchased this structure at Springfield a couple of years ago as I always thought it was a neat little structure...I actually had taken photos of the prototype a couple of decades ago. After visiting Don Janes last fall and seeing how his model turned out I pulled my kit out and built it in short order last December.

I pulled up some of the siding boards, added bracing and gluing the whole structure together with Canopy glue. Not included but added is trim under the eves. The interior base got a coat of Hunterline weathering mix followed by Floquil Grime. The walls got a wash of Folquil tuscan red with a dab of caboose red. I then rubbed some Bragdon dark rust on the walls. I added the nail holes at this point. I just use a pin and eye ball the rows. I find they stand out better if I do this after the powders are added. The roofing I changed out with Northeastern Scale Lumber Co. gray slate HOSNG1B1. The stack is a CNR Juneco caboose stack similar to what I saw on the prototype many years ago....George Dutka

Posted by George Dutka at 08:44 No comments: 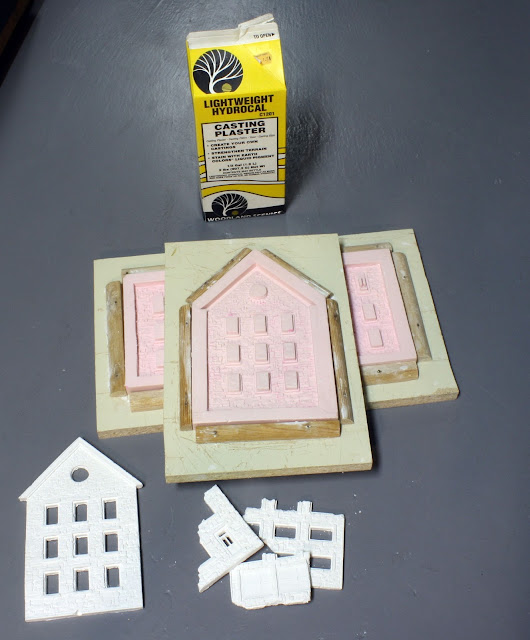 Posted by George Dutka at 18:16 No comments:

When I posted the photos of Greg's layout last week I had a hard time choosing which ones to use so I decided to do a part 2 so you can look at some more scenes on this beautiful layout. I will try to include a few wider shots but am going to concentrate more on close-up shots to show the detailed scenes. All of Greg's scenes are fully detailed showing what you would see if you were standing there looking at them in real life.  Where he excels is adding just enough detail to make the scene look real but not so much that it is cluttered.  When you look at the photos notice how he has attained the perfect balance of detail for any given are.  To me this is an art and Greg has obviously taken the time to note what would actually be present in a scene and knows when he has added enough. 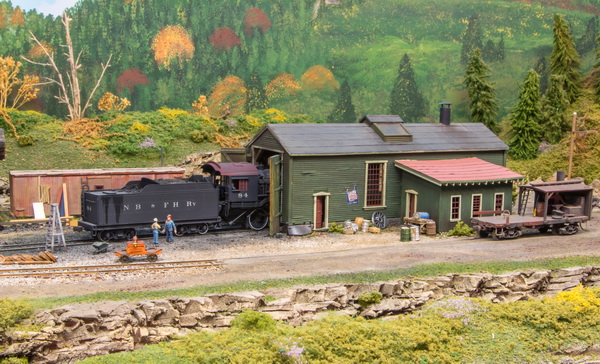 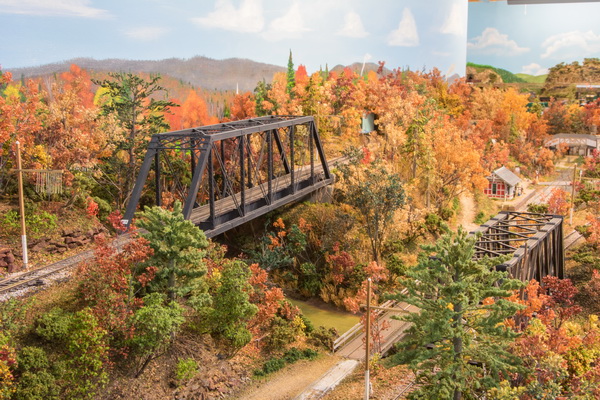 On Thursday Peter and I took a lot of photos while visiting Rapido. I thought you might enjoy seeing a few more...George Dutka

Posted by George Dutka at 08:35 No comments:

If you follow Matthieu Lachance  Hedley Junction blog you may have noted he also has a second blog which covers a very interesting small Erie switching layout along the Harlem River. Check it out at the link below...George Dutka

StJ&LC a Smokin' on the White River Division

A Visit to Rapido Trains, Inc.

About seven or eight weeks ago I received a notice that Rapido was going to hold its first ever dealer open house at its "Galactic Headquarters" in Markham, Ontario.  There would be tours of the facility, announcements of two new product releases, and food and drink at a late afternoon barbecue.  Sign me up!  George agreed to keep me company, and the road trip was pencilled in on the calendar.  June 23, 2016 was the date.

With a full day of activities planned, we left London at 09:30.  Railfan visits were made to Ontario Southland at Salford and to CP at Guelph Junction.  Hobby shop stops included Credit Valley and our first ever visit to George's Trains since the move to Markham.  As it turned out, Rapido's location was just across a side street from the parking lot at George's, so our final move was the 100 foot journey from one parking lot to the other.  We joined the crowd at Rapido at about 3:45.

We were greeted by Jason, the two Dans, and the whole Rapido crew.  We were given a tour of the facility, including the VIA-themed lounge area at the front door and Dan Darnell's CNR orange office.  In addition to pre-production RDC and FA models, there were displays of detail parts, Noise Killer roadbed, and Railcrew uncouplers and switch motors.  A representative from ESU Loksound was test driving the new Loksound/Rapido GMD-1 sound module.  Sweet! 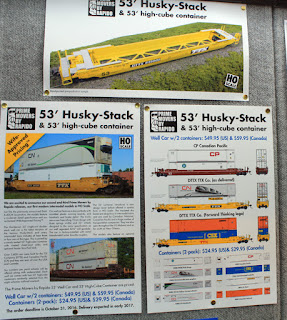 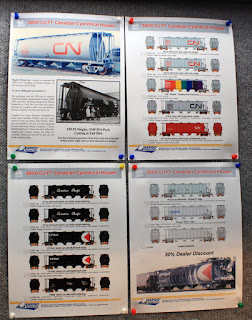 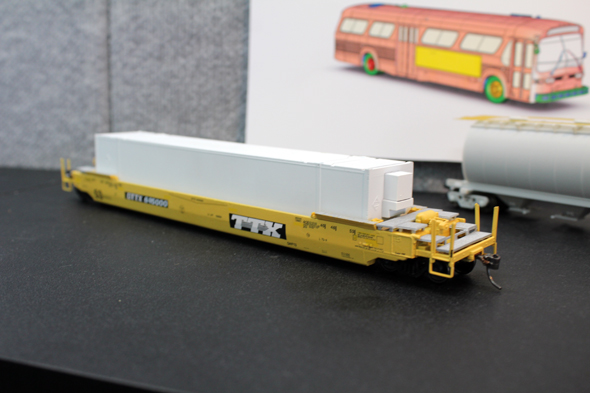 The new product announcements both referred to new freight car models.  In the Prime Movers line, a 53' Husky-Stack car and containers will be produced.  A car with two containers will have a list price of $59.95 Cdn.  As well, a 3800 cubic foot Canadian Cylindrical Hopper will be joining the regular Rapido line.  Finally, modellers will be able to stop relying on the bigger cylindrical hoppers to masquerade as THB 1500-series cars!  Single cars will list for $59.95.

By 5:15 or so we had had a pretty good look around and were pleased to note that Jason was breaking out a new set of bbq tools.  By then a pretty good crowd had assembled (including our friend Jeff Grove from Railway City Hobbies in St. Thomas), and we were all treated to a great meal.  It only got better when a large railway-themed cake was rolled out.  Good food, good trains, and good fellowship.  Thanks, Rapido!

June 23 postscript:
On an entirely different topic, I was saddened to learn that noted Kitchener/Waterloo area modeller and CN authority Dan Kirlin had passed away.  Dan was well known as a DCC/sound expert, sometime importer of brass models, and enthusiast of first generation CNR diesels.  CNR railfans/modellers have lost a well-versed fount of knowledge and a good friend.

Posted by George Dutka at 17:06 No comments:


During my spring trip Peter and I spent a rainy Saturday afternoon checking out locations along the old B&M. Mainly locations we could get shots of commuter traffic. We made a stop at North Billerica, Ma. The station is still standing and refurbished (will cover this later) and a Boston bound train was in the picture. Once we got our shot we decided to stop in at the Pan Am offices which once was a big B&M and Guilford shop area. Today it is nothing...many of the buildings that are useful are rented out. Here is what we saw. This weeks Wordless Wednesday was a view looking inside one of the building....George Dutka 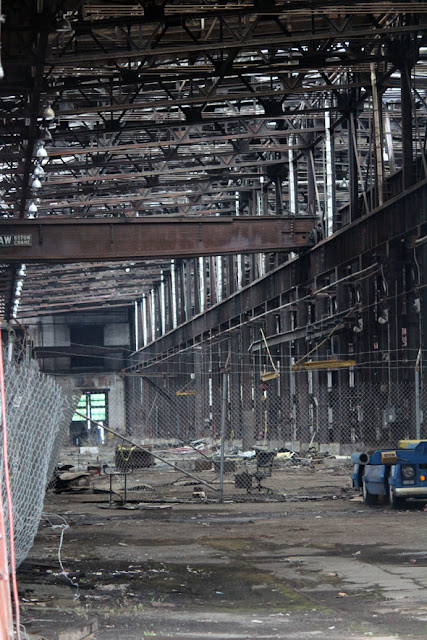 Posted by George Dutka at 18:10 No comments:

A Visit To The New Baltimore and Fair Haven RR. by Don Janes

A 1920's Layout Designed for Operation With Beautiful Scenery

Last fall I got an e-mail from fellow CV modeller Mark Olstyn inviting George, Peter and myself to visit Greg Rich's model railroad.  He included a link to some photos of Greg's layout and to say the least I was blown away by images of an awesome 1920's layout loaded with fantastic scenery and endless detail.  We had to make this trip.  Not long after that I was in Imlay City, MI at an operating session on my good friend Bill Moore's B&M layout and struck up a pleasant conversation with a fellow and happened to mention Mark's invitation and this beautiful layout we had been invited to.  As it turned out I was talking to Greg Rich, owner of the layout.  Greg also extended the invitation.  In the meantime Greg's layout was the cover story in the June 2016 Model Railroader.  Finally the stars aligned and George, Peter and I headed down to New Baltimore, MI this past Monday to visit Greg and Mark.
The layout looks awesome when seen in MR and other photos but to see it in person was a real treat.  It is located in part of Greg's nicely finished basement and features wide flowing aisles and lots of lighting that really highlights Greg's work.  There are long mainline runs as well as several well detailed city scenes.  What really impressed me was the number of scratchbuilt structures and scenes and also Greg's ability to modify kits to fit his needs and vision. I could go on and on about Greg's beautiful work but instead sit back and enjoy the photos and see for yourself.  Make sure to get a copy of the June MR to read all about this turn of the century work of art.