Welcome aboard to another modeling season on the White River Division. A little about my layout. Track laying began in Nov. 2002. The layout was finished in the spring of 2006.  The bench work did go up a year earlier in late 2001. I built my layout in four winter seasons. It measures 11'6" by 13'6" which includes three hidden staging tracks, DCC control and sound locomotive. All the rolling stock is upgraded, kitbashed or craftsman kits built with some degree of weathering. At the end of year four the White River Division was totally finished and well detailed. To accomplish this there are a few stand in structures and scenes from previous efforts that will begin changing this winter. More on this in an additional post.

I have much more room than used for a layout but I wanted to have a completed layout without decades of construction. The last couple of years have been spending building up my rolling stock fleet to the point that I now am planning a yard in the next room based on Bellows Falls, Vermont. This will hold my overflow fleet and give me a chance to scratch build a historic scene. Currently my layout has many rural scenes typical of New England and Vermont in general. There are  prototypical vignettes  of the Central Vermont, Rutland and Boston and Maine Railroads along the line. White River Junction is the one location that has many of the features and structures one would remember from the 1950's. My layout was featured in the March 2009 issue of MR for more general information.

This fall I spent 9 days visiting the  New England area and attending the Fine Scale Model Railroad Expo, held in Peabody, Mass. I came away from the convention with many good modeling ideas and a ton of motivation. In the last two weeks alone I got all the track cleaned, overseeded the layout with fine ground cover (something I have done about 3 or 4 years ago) to add some pop to the landscape.


MEC section house
After arriving home from the Expo I built a Creative Laser Design MEC section house kit purchased at the Expo along with two other structure kits...three days of solid rain in my area sure helped getting into the basement projects and out of the fall outdoor home chores. Although not a structure that will find a home on the layout, the MEC section house was a test for me to see how laser style kits go together and paint up...I added interior details also. To date all my layout structures are either scratch built or resin kits. This kit was an easy build and I am on to one of my more complex structures. 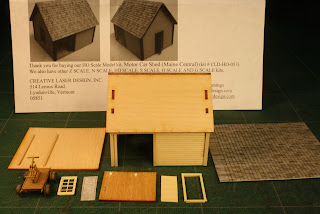 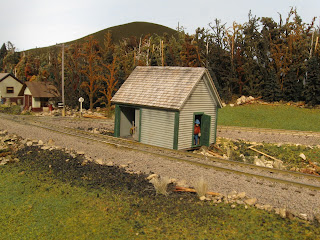 This past weekend I finished a Tichy model war emergency gondola...it turned out to be a much easier build than expected...I finished the kit in just a couple of days...mine is a NYC car in boxcar red. These cars on occasion would carry 4 granite blocks to the mid-west...that became my load and destination. The blocks are 4' x4'x8' made from plaster and scribed for the tooling marks followed by a coating of  Hunterline Weather Mix. A great kit that is worth trying.


I will try to post a couple times a week during my Modelers season...later...George Dutka
Posted by George Dutka at 23:12 3 comments: