By Peter Mumby.
In today's post we will take a second peek over the fence into the Reclamation Plant.  Hopefully, modellers will notice a few details of interest.  There were a few structures on the property, but the bulk of the work was done outdoors.  Given that these photos date to the late 1980s and early 1990s, it should not be too surprising that the bulk of the cars in for dismantling are 40 foot steel boxcars. 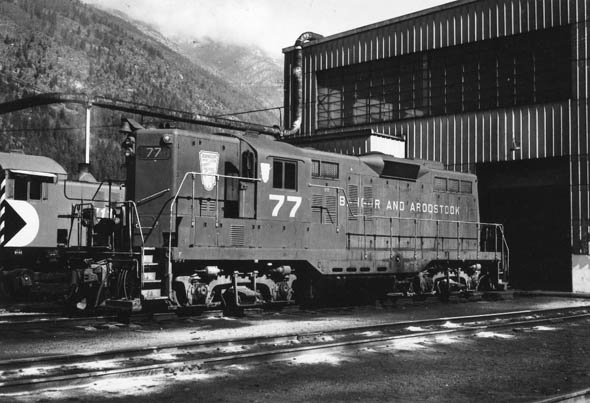 On my visit to Don's last week he gave me an excess loading dock. A Walthers kit he has came with two ramps and he only used one. I have a spot the ramp and dock fits really well without any cutting. Here is what I did...George Dutka

And now for post three for today. Last week I was out a couple of times railfanning. One was a drive along CN Strathroy Sub to Sarnia to visit Don. There really is not a lot running lately so it is a surprise to see anything other than VIA. VIA has only one train each way a day between Toronto and Windsor, #72 and #75 and one each way to Sarnia via the Guelph sub. I planned my trip to Sarina with a stop at Mt. Bridges to get a shot of VIA 72.

My day began with my wife wondering if I should  be making the trip to Sarnia...remember we are locked down. We are only allowed to go out for groceries, the drug store and doctors appointments in Ontario. Railfanning is not mentioned on the list along with country drives. She also mentioned stay away from River Rd as on Facebook she said they have been giving tickets out to guys fishing there and it is near the tracks.

I broke all the rules, I left to visit Don and began by a side trip down River Rd. As I approached the CN crossing (CP is a quarter miles away also) I see a young 20ish gentleman with a scanner and video camera on a tripod at the crossing. Looking at the signals they are greens on both tracks. I pulled over the crossing and began to head for the shoulder. As I did that a cop car was coming over the crossing the other way and sure enough stopped at the rail fan....guess what, I just kept going. This is one of two stops this day that I came across a a cop...the other I had a Tim Hortons to head over to...don't remember Tim's on the stay at home list but that works also...George Dutka

This is the last of my Alloy Forms junk cars. I began by just giving it a coat of Floquil rust. The captions tell the rest of the story.

To begin the story I visited Don this past week...me on his lawn and Don on his front porch, really odd these days. We had a few items to exchange such as the AK rust coloured pencils he picked up for me when he was in Arizona. I could not find any here and to order them, they are sold out. These I used on this auto as a test..George Dutka

By Peter Mumby
The SW9 unit in today's photo first left London when it was delivered from GMD as Toronto Hamilton & Buffalo 57 in January of 1951.  When CP assumed full control of TH&B in 1987, it was determined that the end-cab switchers would be retired during 1988. #57 was subsequently acquired by GMD, and it returned to London in the spring of 1989 to work as the plant switcher.  It operated wearing a patched TH&B paint job for the next twelve months, but was decorated in this Diesel Division scheme in time for the 40th Anniversary open house in June of 1990.  On January 22, 1994 it was leaving London once again, this time marshalled in a westbound CP freight, bound for its new assignment at the parent EMD plant.  I have a photo of this locomotive taken at the EMD 75th Anniversary open house in September of 1997, and at that time it was wearing full Electro-Motive paint and lettering.  It was still numbered as 57.

Check back later today for a second and possibly a third post...George
Posted by George Dutka at 08:43 No comments:

I was going through a box of photos last week that I have from my friend Warren Dodgson. We used to take trips to New England together in the 1980's and 90's although he made a lot more trips than I did. I was raising 5 children and working the CN engineman's spare board. I had limited free time back during that era. We used to trade photos of trips we made. We both did do some solo trips to New England such as Warren's two trips to Essex, Ct recorded here. Warren lives a few blocks away although we don't see each other that much these days. Warren donated his entire photo collection and extensive research material to the Middlebury College in Vermont about 15-20 years ago if one does visits the college. Warren is totally out of modeling and historical railroad research in general. I believe some of his photos are on-line on the college web site including some of my photos that we exchanged.

I thought these detailed B&M milk car photos can help one modeling a milk car. Note the drain spouts next to the stirrups at each end in two photos. That is something one might want to try to model. I forgot all about these drain spouts till I saw Warren's photos again...George Dutka

Posted by George Dutka at 07:37 No comments:

New England Novelty Works is a industry from the past. I built that structure back in the 1980's. Only two sides are detailed. One end and back are just sheet styrene. I am planning a new structure for this location and I have had some interest in this old structure the last few years from a modeling friend from Toronto who visits me from time to time and usually leaves with a few purchased structures that are added to his layout. He is actually building a layout here in London with his brother in their family's home. His brother lives across the street making heading over to work on the layout easy. This month was to be the first time they were opening their layout...but London's layout tour is cancelled. I was hoping to stop by and see what they been up to and see how more than 20 of my structures have been used. They have been collecting them up for a few years now...George Dutka

By Peter Mumby.
By the time I started paying attention to London's Reclamation Yard, it was basically being used to cut up outmoded or surplus rolling stock.  I have seen pictures from earlier times when steam locomotives and first generation diesels were being processed, but I won't be discussing what I didn't witness.  The yard was created in an era when the scrapping of railroad equipment was highly centralized.  As time wore on, more of this reclamation work was locally sourced, and the need for this large facility diminished.  The closure of this plant came about at the end of June in 1991.

The Rec Yard was situated east of the London Yard along the south side of the double track Dundas Subdivision.  The entrance to the west end was near the Hale St level crossing and the CN control point called Highbury.  Highbury (mileage 75.5) was where westbound freights left the south main to enter London Yard.  On the south side of this yard lead was a separate track that was used both for switching and for access to the reclamation facility.  To the east, the premises were bounded at mileage 74.0 by the control point known as Frauts and the Clarke Road level crossing.

By Peter Mumby.
Over the years of production at the General Motors Diesel plant, most locomotives looked pretty similar to corresponding EMD-built models.  Exceptions, however, did exist.  Some were entirely unique, such as the GMD1 or the narrow gauge NF-110/NF-210 units built for use in Newfoundland.  Others were based on standard GM designs, but incorporated significant modifications in cab and/or carbody design.  Examples include CP's SD40-2F or CN's GP40-2L(W) or SD50F.  Cowl-bodied SD60F # 5522, CN class GF-638b, fits into this latter category.

5522 is prepared to head back into the plant after spending some time on the test track.  It is being delayed temporarily by the plant switcher which is yarding a group of flat cars recently delivered by CP.  These cars are all carrying 60-series long hoods for use in current construction.  The track in the photo runs north/south into the plant, while the connecting test track runs east/west beside the CP Galt Subdivision mainline.  The junction between the two lines is in a wye configuration.
Posted by George Dutka at 07:47 No comments:

Recently I was asked about loading platforms with a ramp. I had build a Pickstuff kit back in January that I posted. It is a lot larger than what I would require at the moment on the WRD. Here is a look at a few more ramps that could fit anywhere on a siding. The first ramp seen is one Kip Grant added to his layout. It is a simple but neat looking structure that adds an extra spot for dropping off a load.

Kip noted that he scratch-built his ramp. It is based on bits and pieces of prototype docks he had seen around his area. Kip models the D&H. He measured it up for me as I want to build a similar version for my layout. The dock is 16' by 24' with a 20 ft long ramp that is 10.5 feet wide.

I then asked Don about his two ramps, one that I took some phone photos of as reference. I have two spots on my layout during my ongoing rebuild that could benefit from a small ramp to spot some of the interesting loads and empties that I would like to highlight in scenes...more on this as my focus on this topic widens...George Dutka

Posted by George Dutka at 07:58 No comments:

Adding a Structure to Bellows Falls

The little Bar Mills shanty that I added to my Bellows Falls scene was set on a piece of Gatorfoam as seen here in this photo. I glued the Gatorfoam to the finished ground. Some plaster is then applied to the edges feathering it out into the existing scene. A coat of earth paint and some beach sand, ground foam and Scenic Express coarse foam the scene is done...George Dutka