On our way to the NNGC we stopped by the old B&M station at East Kingston, NH. I had seen it many times in photos but it was nice to see it up close. For B&M modelers a station one my consider building a model of. Although it was raining on and off we made our rounds...George Dutka

One of the layouts opened prior to the NNGC was located in Greenland, NH, a B&M location. Actually the layout is located in view and only around the corner from the station...more on the station shortly. Don and I had an interesting visit to a layout that has pulpwood operations, street running, waterfront locations and a great selection of craftsman kits. Dave Kotsonis models the B&M during 1940's to 50's time period in a 22' by 30' area....after checking out the following photos take a look at the May 2004 MR issue...George Dutka 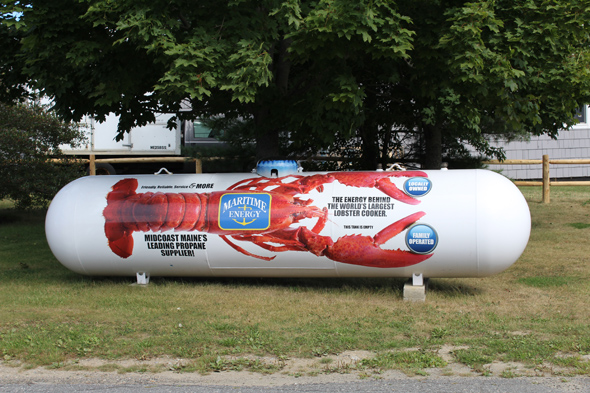 Posted by George Dutka at 15:19 No comments:

Operating on a Boston & Maine Layout

Several years ago I met Bill Moore, a fellow New England modeller and since then we have become very good friends sharing many common interests in the hobby.  I first visited Bill in the Detroit area and saw his beautiful Boston and Maine layout which was the cover feature in the Aug.2012 issue of Model Railroader.  Since then Bill has retired from his job as a University Professor and has moved to a beautiful home in rural Michigan just outside Imlay City.  Here he has built a new 21' x 28' layout which features the Boston & Maine as the primary railroad with connections with the Central Vermont. Although not the official name, he says "I call it the Requiem Railroad because, at my age, it is likely to be my last. I guess I would call it the Boston & Maine-Central Vermont Interchange". Bill says he has completed phases 1 and 2 of a three phase layout.  All of the benchwork and track work is complete for the three major yards of White River Jct., Concord and Enfield and scenery work has been started. Phase 3 will be the Maine Central Line through Crawford's Notch but Bill says that is still a few years in the future.
One of Bill's main passions in model railroading is operation.  He has worked very hard to create a layout geared for operation.  Many hours have been spent designing yards and towns that will fit into a  sequential operating plan. In the case of White River Jct., it has been rebuilt to better accommodate his operating plan.  Not a small job considering all the turnouts have been built using Fastracks turnout components. Bill first studied the prototype railroads to figure out what he wanted to include in his operations then designed the layout to make it all come together.
As you can  see from the above photos Bill's layout had been built in a very bright room to make the operating experience a pleasant one.  There are wide aisles and all the lighting is provided by pot lights spaced to give the layout a nice even light. The floor is finished with a soft light coloured carpet which really helps when standing for long periods during an operating session.  All this work was done before the layout was started.
Without getting too complicated describing the operations, the layout is  designed with operators at the three major yards (mentioned earlier) making up trains destined for various other yards and mainline crews taking those trains to their destinations and doing any other required switching enroute.  Each train is run in a specific sequence and has a "Form 19" order that lists everything the train is required to do from the start to the finish of the assignment.  A car card system is used to route cars to their next destination and a card for each car is left at the yard or industry where the car is located.  The hardest part of the whole thing is to get familiar with the various tracks and industries on the layout but Bill has a done a great job of labeling everything either on the fascia or on the layout itself and I was surprised how quickly I learned where everything was.

Besides Bill designing the layout and building the benchwork, he has built some very impressive structures and his weathering techniques are second to none.The ares that he has finished look great and now that he has the trackwork pretty much finished and the operating scheme in place Bill plans to forge ahead with some more scenery.  I might add also that the layout runs flawlessly due to excellent trackwork and is controlled by a Lenz DCC system. Bill is an excellent modeller and I can't wait until my next visit to see what progress he has made with more scenery and structures.
The operating session ran from 10am to 3:30pm and the time just flew by. Bill's wife Juli provided a delicious lunch also.We had five operators plus Bill overseeing the operations.  Bill is a gracious host and we all enjoy being part of his operating crew, always looking forward to the next one.

His is a small group of scanned slide of a visit to Whitehall, NY by Gord Taylor and Bruce Douglas when there still was something there...George Dutka

Posted by George Dutka at 10:36 No comments:


I scanned some older views from when I was still constructing the White River Division. Have a look at how some area's came together...George Dutka 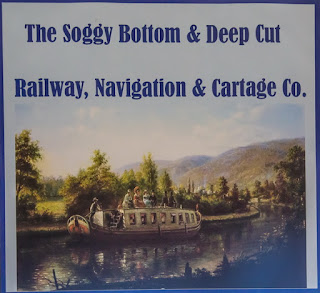 One of the best attractions at the National Narrow gauge Convention in Augusta Maine was the three rooms full of Modular layouts.  George and I had visited two of the rooms and were extremely impressed with the high quality layouts on display but one evening while going over the convention brochure George discovered we had missed an entire room which was tucked away down several isolated corridors.  The next day we visited this secret room and discovered some of the best modular layouts at the convention.  My favorite in the room was this featured layout brought to the convention by a group from Ohio.  It turned out that the Soggy Bottom "O" scale layout won the best Modular Layout in Show Award decided by popular vote.  There were many layouts with more trains and railway equipment but I think it was the overall quality of the work and natural look of the scenes that made this such an attractive layout to view.  The workmanship was superb.
The neat thing about this layout it was built using a shadow box design.  There were two side scenes and two end scenes, each in their own shadow box.  This effect separated the scenes from each other giving the impression of a longer run for the train without needing a lot of open space between scenes.  The other nice feature was the even lighting on the entire layout created by lights above the layout behind a valance created by the shadow box.  This made photographing the layout without a flash very easy as lighting was bright and evenly distributed over all of the scenes
Sit back and enjoy the photos and see if you don't agree that this was a great looking modular layout.

Posted by George Dutka at 11:05 No comments:

Hunterline premiered their new covered bridge kit at this years National Narrow Gauge Convention. Here are a few views...think this one will be a good seller. On another note leaving in the morning to Vegas so might not be any posts till I get back on the weekend although I think Don has something planned for you...George Dutka 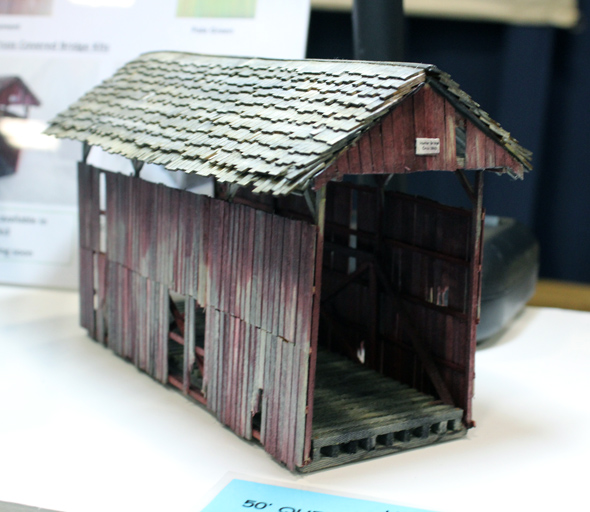 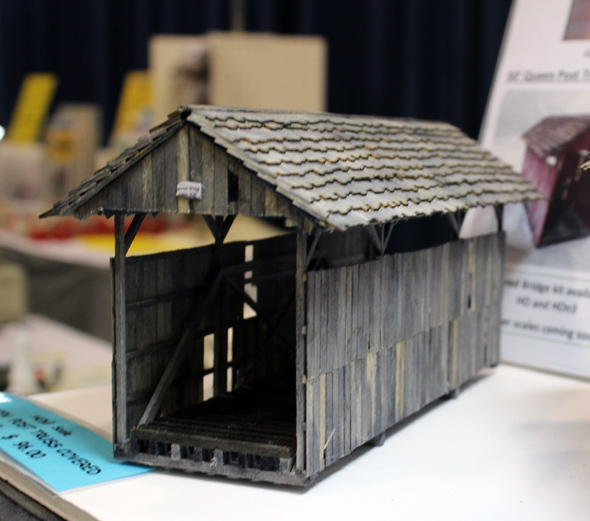 Posted by George Dutka at 18:18 No comments:

Don and I stopped by the station in Exeter, NH on our way to visit Tom Oxnard's B&M layout in town. We found that we arrived close to the time of the Boston bound Northeaster so we decided to wait. It was also operating with a dome car so that was also neat to see. Listening in to the conversation of a few waiting passenger they had come to ride the dome car that day. The weather sucked due to Hermine and as the train arrived it began raining once again, Oh well...George Dutka

Rockingham Jct.
After visiting layouts in Exeter and Greenland, NH  Don and I visited Rockingham Jct. NH during our trip to Maine. Thanks to Dan Raymond for guiding us to this location a short distance away. This day was one full of rain and overcast sky's thanks to hurricane Hermine. At Rockingham Jct.a PanAm train is awaiting a crew to continue on...possibly Portsmouth, NH. The train is sitting on this branch line just off the corridor main line running north and south. Not many options for a good photo as it was later in the day and very overcast. The rain had stopped which was a blessing as we still had a long drive ahead. For my photo I just decided to crop out the whole sky and surrounding area with the wooden overhead bridge we stood on for the photo...this is what I came up with....George
Posted by George Dutka at 20:21 1 comment:

A Visit to Waterville, Maine

Last Saturday Don and I decided to head up to Waterville, Maine to check out the yard, shops and engine facilities of the old MEC. As it turned out most was not accessible to us, which was no surprise. The yard lead does stretches out of the yard leaving us some options to photograph the yard work. We also got a good view from a playground used by a local daycare...lucky it was a Saturday or we would have been in trouble there also...was nice to see the MEC heritage unit up close working the yard...George Dutka

Posted by George Dutka at 14:30 No comments: