I noted the other day that Bowser has a three bay ribbed sided hopper with woodchip extensions. The model looks good but as the other models released the extensions are not actually what are on the B&M cars. I kind of turned a blind eye to my models built by Chris Wright considering there are other issues with these cars. If I was going to decal a ribbed car I would build the proper extension. The B&M Bowser offset woodchip hoppers also have ribbed extensions which is not correct for the B&M but a detail I am going to live with at least for now....George Dutka

I was surprised to see Ryan Mendell as I walked in the doorway at Saturday's Ontario Narrow Gauge Show held in Schomberg, Ontario. Ryan's new business, National Scale Car does not actually fit the bill of narrow gauging but casting does. Ryan had come to the show with one of the organizer's Doug Curry and decided to bring along what one needs to cast car ends and doors. Kind of neat idea, giving attendees a look at how castings are done and it also gave Ryan a chance to get caught up on casting orders. More on the show is found on my narrow gauge blog...George Dutka

Posted by George Dutka at 07:32 No comments:

At the Kitchener Train Show I picked up this covered hopper painted B&M blue. I don't recall any cars like this on the B&M but maybe I can do something else with it. Sure enough when Peter and I left the show we come across a CN switcher in town coming off the spur that runs down to the old Budd plant...and what do we see...a prototype version of the covered hopper I purchased. I guess I have a view to work from...George Dutka

This months snapshot is from a trip to St. Thomas this week.  Peter and I visited Brian Smith to check the progress on his layout Monday. Brian asked for some motivational direction which I hope we delivered. Once we left Brian's we headed over to the CN yard to see what the OSR might be up to. We got lucky and found two F units switching the yard...and in partial sunlight. Peters photos are labled...George Dutka

This winter I picked up these two B&M woodchip cars from Chris Wright at a local train show. These are two early attempt by Chris at modeling woodchip cars. They do resemble what the B&M had but are two not three bay hopper cars. The lettering is not right but close enough for me as I don't have any of the ribbed side cars and they will make good stand-in's till I build a proper model. It actually gives me a chance to work on improving my weathering techniques. When the time comes they probably will be in my sale box...in a few years, not decades I hope...George Dutka

Posted by George Dutka at 07:51 No comments:

Posted by George Dutka at 07:55 No comments:

On March 9, 2019, we were doing some railfanning in Ingersoll, Ontario.  An Ontario Southland train was pulling a train of autoracks towards the Cami plant.  Included in the consist was a nice group of new CP cars.  I photographed four of them, specifically TTGX 697628, 697630, 697632, and 697633.  Take a look at three of these cars in their pre-graffiti state.

Posted by George Dutka at 08:00 No comments:

While I was in Arizona this past winter I got talking to a fellow from our park who was from Durand, Mi.  He mentioned that the old GTW station had been renovated and turned into a museum and was well worth a visit.  Since we go right past Durand on the way home I decided it would be a good rime to drop into Durand and check it out.  I had seen many photos of the station back in its busier times but had never been there. What a pleasant surprise I had when I pulled into the parking lot.  There stood a beautifully renovated station surrounded by well kept grounds. The platform along the tracks had an iron fence but it was low and there were all kinds of place to get photographs.  I met a fellow railfan who told me there was an eastbound CN freight due in about five minutes so I held off checking out the museum until after it passed.  It turns out there are a couple of TV monitors showing a dispatchers panel view of the entire Flint Sub so you could always see were the trains were.  Once the first train passed I went inside to look around.  There is no charge but donations are welcome.  Unfortunately I didn't take any photos inside for some reason.  Checking the screen I could see there would be another eastbound coming along in about twenty minutes.
The museum is very well laid out with many glass cases with artifacts such as steam engine number plates, a bell and whistle. There are also all kinds of other items, all labelled giving their background.  They also have a beautiful collection of old photos of Durand and surrounding locations showing the station, 360 degree roundhouse and other railroad related structures as well as a great collection of GTW steam locomotive photos. The upstairs has museum offices and there is a large banquet room at the front (north end) of the station.

There are several lines running by the station.  The east/west track is the CN Flint sub running between Port Huron and Chicago.  The north/south track that crosses at the diamond is the Holly Sub to Detroit. Off that there are connecting track in both directions to join the Flint Sub.  There is a yard on the north side of the Flint sub which I believe is now operated by a short line. From that yard lines run to Petoskey, MI and up to Saginaw, MI. The Ann Arbor RR once had a diamond on the East side of the station but it is now gone. In the distance there was a large concrete coal tower but I couldn't find a way to it.  Durand was a very busy railroad center back in the day. 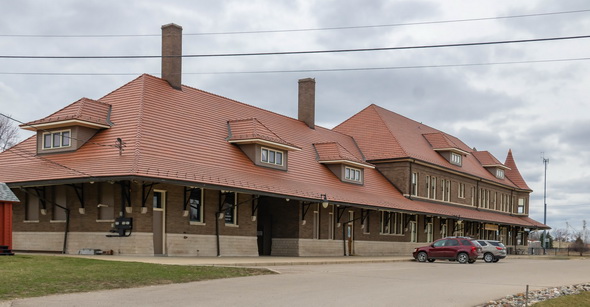 Besides the station museum there is a little park on the north side of the tracks where there is an old GTW 4-6-2 # 5632, a GTW express car and an old crossing tower.  There is a also an old GTW steel caboose. It is one of a bunch the GTW bought off the Santa Fe RR back in the 1960's or 1970's.
I am really glad I took the time to stop in Durand and check out the station museum and the steam engine and other items on display.  It was well worth the time spent and I would recommend it to anyone travelling in that area. 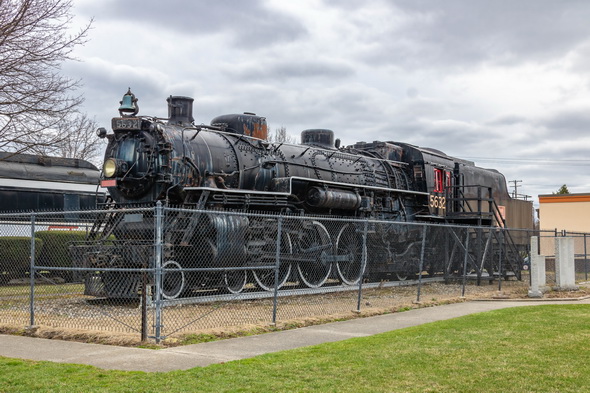 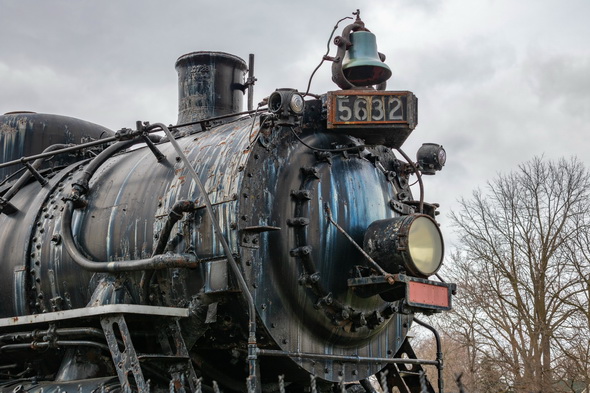 Posted by George Dutka at 07:28 No comments:

The CV Rocket, train 245 was a small train this day. Since this is the Saturday edition of March 1, 1980 the power needs to get home so two cars are better than none. This would make a great train to model on a smaller layout such as mine...George Dutka
Posted by George Dutka at 07:56 No comments:

I thought I would share with you some views and updates made to my F&C  Central Vermont 36' boxcar kit. As one can see from the photo below I have a second boxcar for the fleet at some point. This car has been in storage for decades and might be closer to the top of my build list now. As most of my fleet the Kadee couplers have the trip pin clipped, and a nice light coat of PanPastel powders applied. I felt it needed a light coat of Floquil boxcar red applied as an over-spray to blend the finishes...George Dutka


These two photos really display what took place in White River Jct. Vt. in 1966 when the B&M and CV Ambassador's would meet in town. Ken Patton allowed me to use these two images and notes it has been over 40 years since he last photographed or visited the CV. Ken's comments tell the story...George Dutka

The train pair between Boston and Montreal, (via CP), had been cancelled the previous year. As a result, there were only two, rather than four trains in the station at one time. By July,1966 the northbound and southbound Ambassadors arrived about the same time on their runs between New York and Montreal. Both trains were down to three cars. The plan was for the first two cars on each train to continue to destination, while the third car on each would return to its origination. This shot was made midway in the "shuffle". The CV Geep has been wyed and replaced the n/b B&M power. (The CN return coach is visible to the left). Another set of B&M power has hold of the CV s/b, through cars and joined them up with the NH return coach, now separated from the n/b through cars.

The photo below views the scene once the southbound Ambassador had departed with B&M power. As the smoke clears, CV's Alco switcher continues the process of adding the CN "return" car to the rear of the northbound Ambassador. The inbound B&M power, just visible on the left will be hosteled over to Westboro for servicing. If there are no problems, the units will most likely be used to head the night time sleeper train, the Washingtonian, down to Springfield.

Here we have a few views of some additions to the WRD fleet. The cars were built by Bob Bowes but are a bit worse for wear. Couplers and stirrups are found missing on each of these cars. Once glued back together some additional weathering and off to work they go. In total I think I purchased about 25 pieces of Bob's rolling stock, many of them for New England railroads. They are very nice and I will cover more as time goes on...George Dutka 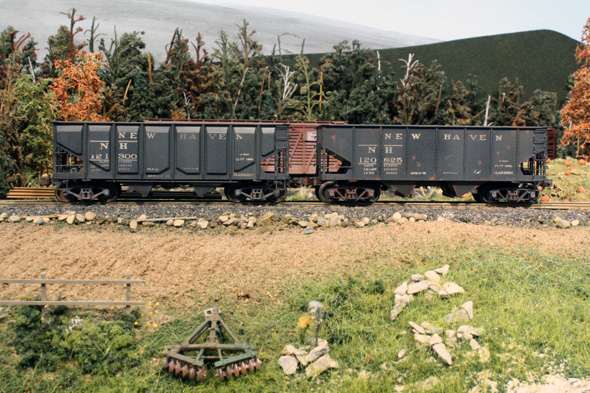