George and I attended the 53rd annual Amherst Railway Society Show ( a.k.a. "The Springfield Show") on Saturday January 25, 2020.  I had heard a lot about this show from local hobbyists who attended on a semi-regular basis and were enthusiastic about the experience.  However, for years I had been attending local train shows as a vendor, and had a show which conflicted with the Springfield date.  When I retired this small business at the end of 2019 after 40 years of operation, I was ready to give the big show a try when George indicated he was planning to attend.

You are well aware of the scope of this show long before you see your first train display.  Consider the length of the line-up of cars waiting to turn into the Eastern States Exposition lot, the multiplicity of police officers on traffic duty, and the number of ticket booths where you line up to purchase your admission arm band.  Also consider the cost - $5 to park, and $15 for admission.

We were on site before 9:00, so we were present for the air horn blast that signaled the opening of the doors.  Yikes!  How many decibels was that?  There were a few outdoor displays, so we decided to check these out and avoid the initial entry queues.  A cold rain was in the forecast for mid-afternoon, so this was the right time for outdoor photography.  The Wiscasset, Waterville and Farmington Railway Museum had a narrow gauge locomotive outside the Better Living Center - under steam, yet!  Also present was an interesting MOW truck in New Haven lettering.

The show itself featured 415 exhibitors spread out through 4 separate buildings.  Before we started our tour, we had agreed to aim for a 3:30 quit time as a way to avoid the exit stampede from the parking lot, so we knew we would not be able to see everything.  As it turned out, we only visited three of the four buildings.  If we saw half of the displays in each area, that means that we took in about 40% of the show - 166 of the booths.  Sounds about right.

There were lots of vendors of the ordinary plastic locomotives and rolling stock which you will see at any train show.  I was expecting to see lots of the latest and greatest releases, but was surprised to see that a large proportion of what was on offer seemed to be older stock.  The prices also surprised me.  I was expecting to see more mark-downs and clear-outs, so I found both new and used items to be a bit expensive, even before I calculated in the differential between the Canadian and American dollars.  The flip side of this is that it is a wonder we don't have more American visitors at our Southern Ontario train shows where they would certainly get more bang for their high-powered buck.  But I digress.

Many of the structure kit manufacturers ( think Fos Scale, Railroad Kits, ITLA, and Hunterline, for example) had very impressive displays.  Manufacturers/Distributors such as Walthers, Athearn, Rapido Trains, and Atlas had booths.  Scale Trains was probably my favourite in this category.  Prototype and historical groups were well represented and offered books, calendars, and clothing for sale.  We spent a fair amount of time checking out the HO scale vehicle displays in the Mallary complex.  In this same venue there were a variety of kid-centric displays, including a huge Lego display layout and stage shows by Maggie the Train Clown.  Something for everyone, indeed.

If I had a complaint about the show, it would be that attendees of a certain age could really use more places to sit down for a few minutes.  We were fortunate around 2:30 to find a couple of seats in the Bar Mills clinic area where we could rest our bones and take in a few tips and modelling tricks at the same time.

So, that was my first visit to the Springfield train show.  As far as the exhibits were concerned, I feel like I barely scratched the surface.  I will definitely have to consider a return visit!

By Peter Mumby.
CN Hyde Park is located in the west end of London, Ontario at mile post 4.1 of the Strathroy Subdivision.  In years past, a passenger station was located here, and the short siding that served this facility was still in use in 1995 for the occasional run -around move.  This siding ran off the south mainline track, while the turnout for the Ilderton Spur was located on the north track.  This spur was the truncated south end of the Exeter Subdivision.  All of this trackage was conveniently visible from the Hyde Park Road overpass.

In the early hours of February 16, 1995 an eastbound freight powered by CN 2105 and LMS 723 struck the tail end of another eastbound train which was stopped on the south track just under the overpass.  By the time these photos were made around noon hour, men and machines were in place and the clean-up had commenced.  The LMS unit remained on the track, while the 2105 had been spun around and was off the track, facing south west.  The lease unit survived the crash, while 2105 was retired later in the year. 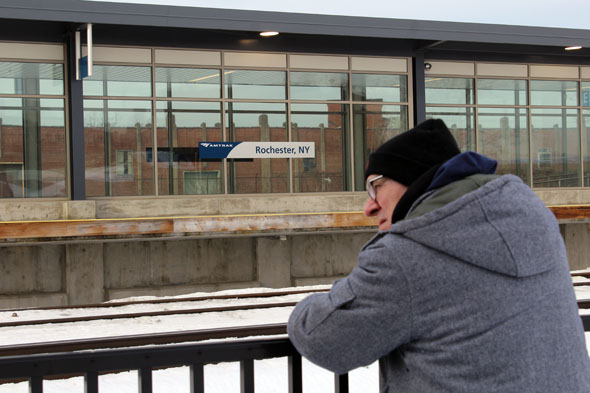 Posted by George Dutka at 07:44 No comments:

A few weeks ago I read a post on the D&H "Colonie Main" layout (link on sidebar) regarding a railroad exhibit called "The Power to Move Us" that is being displayed at the Kodak Photo Gallery in Rochester, NY, till the end of the month. Peter and I did a side-trip from I-90 into Rochester to the Amtrak station and Kodak Gallery and Museum. We would have loved to get a Kodachrome sweatshirt but the gift shop was closed the day we visited...maybe another trip? Be forewarn, it is nice to see but maybe not a location to base a whole trip on. They do have tours of the plant on occasions...George Dutka 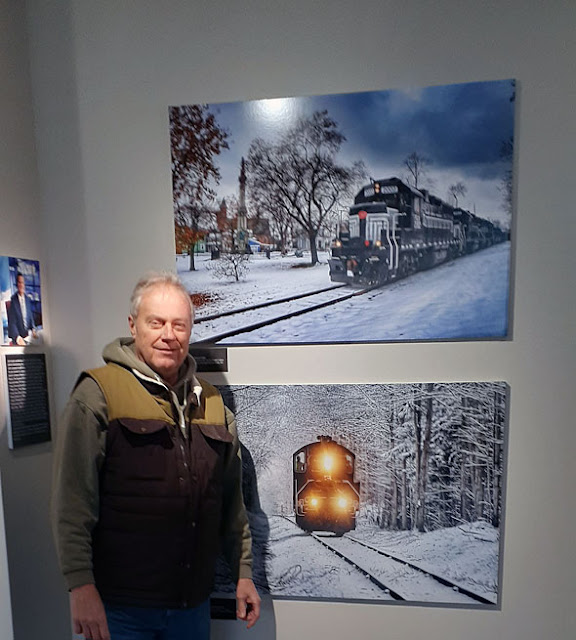 Posted by George Dutka at 07:47 No comments:

This months snapshot is a visit to Palmer, Mass. on Friday before the Springfield train show by Peter and I. We might have timed it right as the NECR SB was waiting at the diamond, the Mass Central is pulling a cut of car into the CSXT transfer yard with about 15-20 railfans hanging around. We missed the Mass Central heading to the transfer as we pulled into the parking lot but would see them again shortly. We realized quickly the NECR was waiting for a train to pass with railfans pointing in different directions. A headlight appeared within moments. It was a WB Amtrak that we saw. A not bad visit seeing three trains, two more than once in about 30 minutes sometime after 3pm...George Dutka 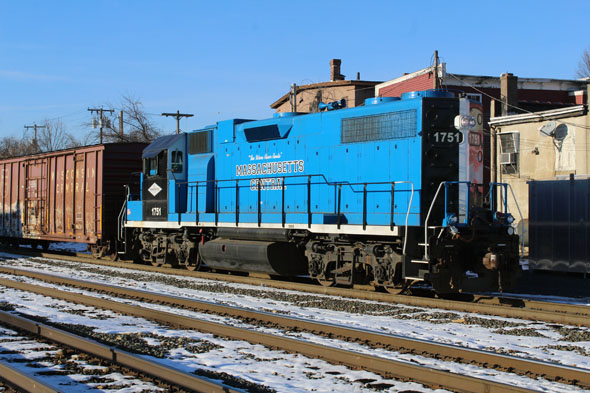 One of my flea market finds is this Walthers 50' Hopper. Some weathering had been already done when I purchased the car by air brush. The photos tell the story...George Dutka

Throwback Thursday - It's All in the Details

When I took this photograph almost three decades ago, it was probably just another train picture.  In this case the train was CP 5606 South.  Nothing unusual in this - another train led by an SD40-2 on what was basically an SD40-2 railroad.  The location was Britt, Ontario, on the mainline between Sudbury and Toronto.

What I see when I look at this picture today is a scene that could really appeal to a modeller of the late 1980s/early 1990s era.  Here is an opportunity to include an older passenger station on a layout representative of a time when local passenger service was a thing of the past.  The structure has been given a new lease on life by being converted to company service use.  At the far north end of the structure can be seen a motor car shed and set-off track.  The tall pole close to the station appears to be topped by some type of antenna.  The south end of the baggage/freight annex has been rebuilt with roll-up doors.  Next to the building is a fenced compound housing vehicles and track supplies.  To the left side of the photo can be seen the main sliding gate for the entire facility.

In the foreground of the scene we can see organized stacks of track supplies.  To the left of the high level switch stand, the vertical silver unit is a block occupancy indicator.  At the rear right side of the photo, near the box cars, we can see a mile marker attached to the line pole.  At the extreme front right edge of the image an old telephone call box is visible.

One of the kits I picked up at Woodstock earlier this month was a loading dock kit. Peter Mussen who had the table next to us still had it near the end of the show...I was surprised it lasted to this point. Glad I got it. I was able to construct two docks from the kit with a few leftover pieces...George Dutka 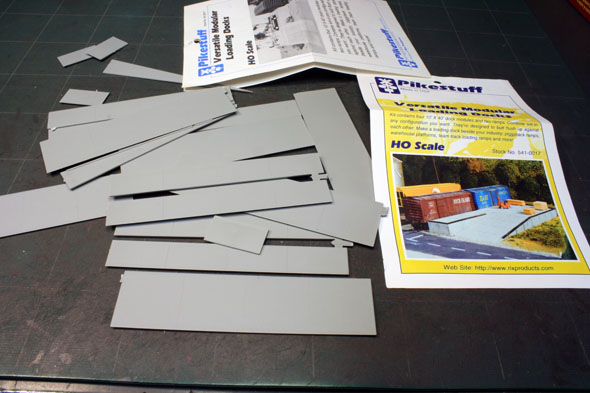 Posted by George Dutka at 07:04 No comments:

Peter and I attended Sunday's Paris train show this time working on projects at the NFR craftsman corner. Peter was weathering rolling stock using PanPastels and I began building another FOS kit-of-the-month. We also helped out manning the door.

Wednesday Peter and I are heading to Springfield for the train show there. This is the first time for Peter. On the way we will be doing some railfanning and maybe stop at the Kodak museum to see the railroad display that is on this month. A visit with Kip Grant on Friday to see his layout again and then off to the Springfield area to meet up with a gang for dinner...George Dutka

Posted by George Dutka at 07:37 No comments:

My new abandoned pickup truck. I picked it up for a buck at the last train show...now to find a place for it to rest...George Dutka