A Section Shanty for Wells River

As  was planning and building the Wells River station scene I added a water tower next to the station but I felt that there should be a section shanty there also. The prototype Wells River was once a busy junction where B&M trains cut off to head to the New Hampshire paper mills and the CPR headed north to Montreal.  On the green Mountain Division an abandoned right of way cuts off near the station.  Since the station is a model of the actual Wells River Station I figured a B&M section shanty would be fitting for this location.  I had several small shanties on hand but none really looked right here.  Wondering what I should use I remembered that I had taken a bunch of photos at a recent RPM meet of some section shanties that friend and B&M modeller Jim Dufour had on display at the meet and also had taken a photo of a set of plans that he had along with the models.  The plan I used was of the B&M section shanty at North Walpole, NH. but it is very typical of many B&M section shanties. I had some good reference photos of his model also so I set out to scratcbuild the shanty.
I decided to use styrene for the job since I had recently purchased a large stock of styrene from an estate sale. Following the plans, I layed out all the parts on a sheet of clapboard siding then cut them out and then cut out the window and door openings. I went through my box of windows and doors and found three appropriate windows for the structure. I did deviate from the plan a little for two of the window placements as I thought they would look  better for my application.
Once the main pieces were cut out I added the corner, base and eve trim using various sizes of strip styrene.  The two doors were made from scribed siding and added from behind.  I also added some scribed siding to floor in the door areas to represent plank flooring.
The roof was made from .030 plain styrene sheet but since I wanted to use peel and stick shingles from BEST Scale Models I decided to laminate a sheet of plain white paper to the outer surface of the roof halves to allow for a better bond between the shingle and roof.  I did this by applying a coat of 3M spray glue to both surfaces then applying the paper to the styrene.
Once the shanty was fully assembled, minus the roof I painted the walls with a tan primer and let it all set up.  I referred to an article I had written about the station construction for the colours.  Colouring is very subjective but I use Polly Scale TH&B cream for the light colour and Floquil Oxide Red for the trim.  These colours were brush painted.  Once dry I did some light weathering on the structure. I didn't overdo it as I think back in the days I am modelling the section gang would take pretty good care of their shanty.  I also added a small light over the door.
Back to the roof, I added the two halves, painted the paper grimy black then added the shingles and then the roof cap.  The chimney is a casting I found in my parts box. The structure was now ready to install in the layout.
Once the shanty was in place I added the two timbers and ties for the handcar pull-off  and finished the ground cover around the building.  I am really pleased with this shanty and really like the size of it. I feel it really works well in this scene. 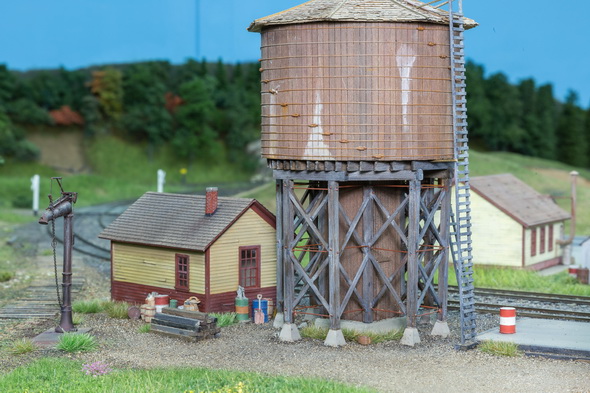