Throwback Thursday - On the Ground

By the early 2000s, Norfolk Southern freight number 327 was consisting primarily of loaded auto parts boxes headed for the St Thomas Ford plant.  The auto rack traffic it used to carry was now being handled by CN.  Periodically the train would handle a few frame flats and covered hoppers as well.  If the consist stopped at the CN St Thomas North yard and remarshalled the train with the covered hoppers at the head end, this was a pretty good indication that the power would be heading west from Talbotville after dropping the boxcars at Southwold Yard.  The covered hoppers would be delivered to Cargill Elevators at Paynes Mills.  At this location a light rail spur snaked through an S curve off the mainline.  It was quite something to hear the rails creak and groan as the pair of big 6-axle units backed in to make their set-out.  On the day when these photos were taken, the delivery had been successfully made and the units were on their way back off the property when there was a loud "thump!" as the rear truck of the 9353 came off the rails.  Not surprisingly, the rails had spread under the weight of the locomotives.  Two days later, I photographed the NS unit at CN's London yard waiting to be forwarded to Toronto for traction motor repairs.  As for subsequent deliveries to Paynes Mills, they were handled by a pair of rebuilt CN GP9s.  Someone made a good decision. 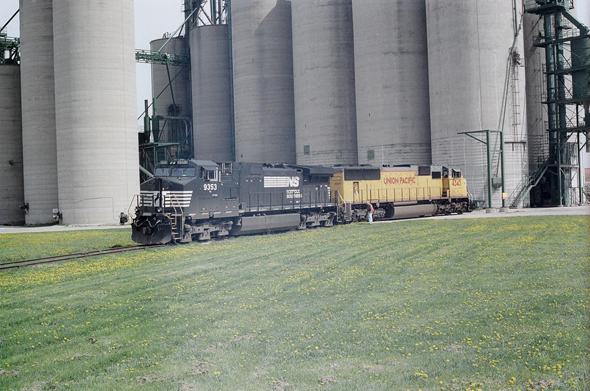 The return trip to the mainline of the Paynes Subdivision didn't go as smoothly.  The crew member in the photo has just verified that the rear truck of the 9353 was on the ground.