New Structures For Waterbury On The Green Mountain Division

Filling In The Gaps At Waterbury.....by Don Janes

After spending over three months in Arizona this past winter it was good to get back to some modelling when I got home.  Before I left in Dec. I had been working on my Waterbury, VT. scene. Back in the fall I traded a structure kit to George for a small diner that he built from a FOS kit.  I really liked the look of it and thought it would look nice on my layout.  I also purchased a new FOS kit, Hollis Pest Control.  I really liked the lines of the structure and thought it would make a nice addition to the Waterbury scene.  It came with signs for an auto repair shop also so I elected to use it as that rather than a pest control business.
Once construction of the building was done I set to work laying out these foreground structures.  Since I wanted to make the scale model of the actual Waterbury station be the focal point of the scene I didn't want to hide it with other large structures so I placed these two buildings in the scene so the station would still be highly visible. To date I have the base scenery for the scene finished.  The two structures are removable so I will finish the background scenery next as I need to reach over the foreground to complete it and I don't want to damage the foreground buildings.  The scene is finally coming together and it has been a lot of fun to work on. 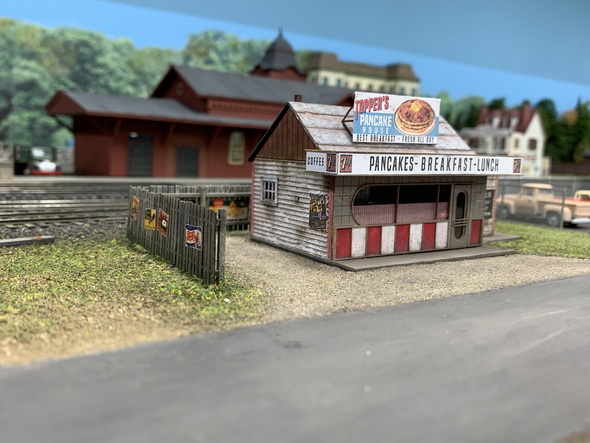