A New Scene
on the White River Division
My summit station scene gave way to a new coal dealer. The water tank and section shed at Summit that I removed were of Maine two foot origin and was intended as a stand in till I could build a more permanent scene.

Once the details were cleared from the area I used my RotoZip tool to cut out a section were I was going to add the coal dealer and siding track. I wanted to place a coal load or two at Crosby, but did not want to cut into the layout trackage since I would never spend time switching this industry anyhow. The trackage seen at Crosby is only staging and not connected to the layout. The switch area and some trackage is hidden by tree groupings.


I built a base for my structure to rest on out of cardboard. Once I had the height adjusted right I built up the areas with cardboard and covered it with Woodland Scenic plaster cloth. For the trackage I laid out some cork roadbed over the scenery. I adjusted the height near the mainline just in case some day I want to cut in the staging. At this point some Goop is mixed up and applied along with ground foam and dirt. The roadway is limestone screenings that continued the original roadway. I spread some Woodland Scenic coal around the structure and on the trackage behind.

I finished off the scene with a Classic Metals Works truck, an old time Woodland Scenic tractor, a coal loader, some men, shovels, skids and barrels. For now one empty hopper is spotted on the siding...George Dutka 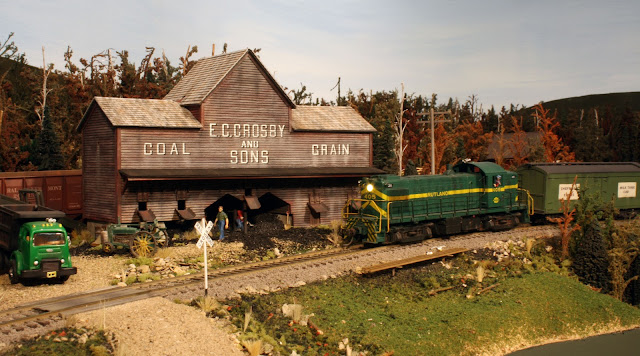 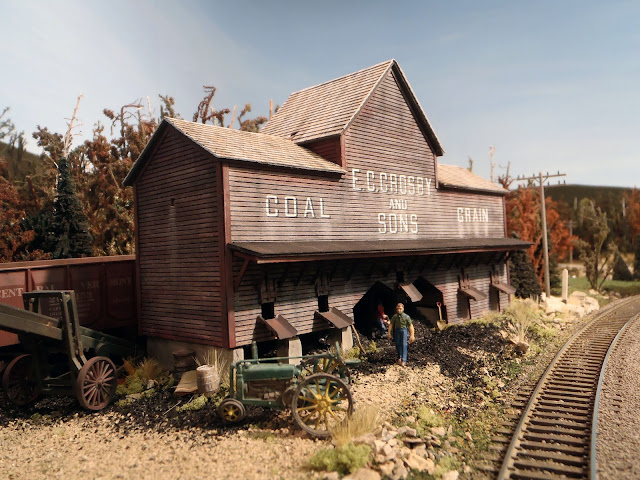