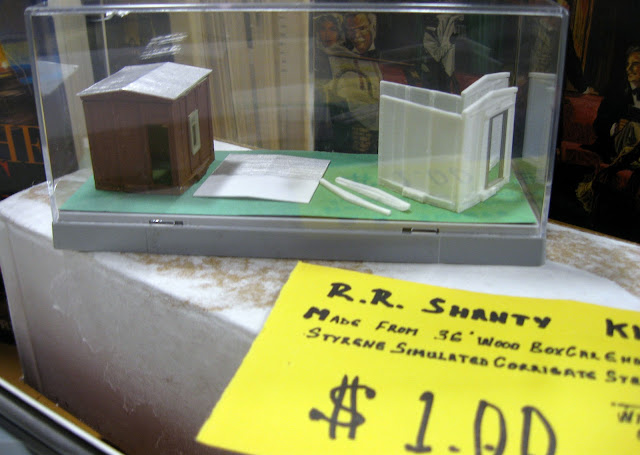 Getting a Kit for a Dollar...

Back in November my friend Andy and I took in the TH&B model RR flea market near Hamilton, Ont. At one of the tables I came by an interesting gentleman's selling a cool simple kit for a buck. I did not have the heart to tell him he will never get rich on this venture. The kit includes four walls and a roof sealed in a bag. You supply the windows and doors. The kit is actually four CNR 36' outside braced boxcar ends and the right sized ribbed roof. I purchased three...one for Peter and I to build as one of our weekly projects and I sent the third to Don Janes in his Christmas card...aren't I cheap with gifts.


Peter and I cleaned the ends cutting the peak off two sides. For the doors I had some Tichy doors and windows left that came with my coal tower detail package. The opening for the doors and windows were easy...the castings cut like butter. We used Walthers Goo to glue the windows and doors in and attach the corners together. We still had some leftover corner bracing from the Dannen Feeds kit we just finished so they were used for corner support. The roof was scribed were the peak would be, then bent and glued on. This took us less than an hour and was done at the end of one work session. I painted the shanty's Floquil boxcar red. I used some green chalk weathering applied to the door and window as the accent colour. I found a caboose chimney and added it to my model. Peter will add his at a later date. The roof would have been galvanised  so I dry brushed some Floquil old silver over the roof followed by rust chalk weathering
.

When Peter and I got together next we decided to add a CNR prototype number to the car ends to reflect the heritage of the shanty. This was a simple add on from leftover Champ decals. Clear plastic windows and paper blinds were added and the building were done.

Peter and I built a small diorama to display his shanty till he finds a spot at home for it. Mine was going to replace a western  style shanty located near the Bellows Crossing diamond. This was a really cheap and easy building to construct. One could use two ends from a kit that will never get  built or one could cut the ends and sides out of a boxcar purchased at a flea market or better yet just visit the TH&B flea market this January and buy a kit for a buck....cheers...George Dutka