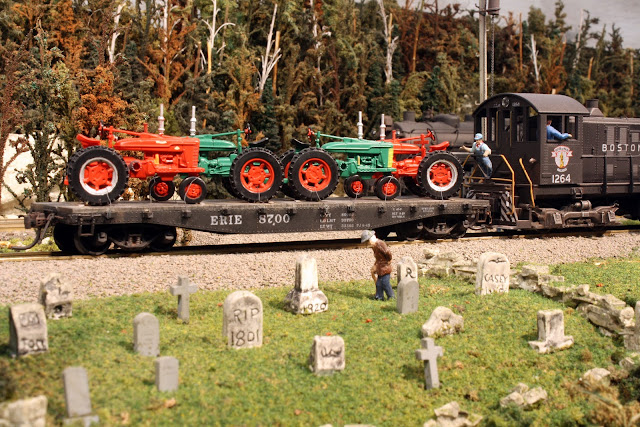 A tractor load for my new flat car

I had seen Lou Sassi, Andy Clermont's and Trevor Marshall model tractor loads in past books and magazines...and they look neat. I wanted to add one to my fleet also. I had recently purchased a Red Caboose 42' flat car kit in Erie lettering that could easily be loaded with four tractors. The tractors I had purchase over a year ago are Life-Like models that come in a two pack. One painted red and the other green. The red tractor represents a Farmall while the green tractor reflects an Oliver.

Trevor Marshall had an article published in Model Railroader (July 2002) which details changes that better reflects the prototype of the Farmall tractor. I followed his article to detail my two red tractors. The green tractors were left as is since I did not have enough information to better detail the Oliver tractors. Lou's material regarding farm equipment has been published in his most recent book "How to build and detail Model Railroad Scenes Vol. 2" by Kalmbach Books.  John Nehrich wrote an article about Andy Clermont's tractor load flat car in RMC, Aug 1989. Between all the articles you can easily research how to build your own.

On my model the flat was already lettered. I repainted the deck with Floquil grime and roof  brown. I also had added some wooden strips that I stained a driftwood colour for bracing. The finished tractors were then glued in place. Since I had two of each builder I just made it a mixed load. Normally the tractors would all be the same. For tie downs I used fine electrical wire painted black and fastened to the stake pockets. For the record the flat car cost me 5 bucks and two packages of tractors 20 bucks. No wonder the farmers are complaining. That's it...so get to work on your own...George