by Don Janes
EMD originally built the FL-9 model locomotive for long haul passenger service.  The idea was to lengthen the unit and add a six wheel rear truck carry the weight of a steam generator and extra water capacity.  The Santa Fe tested these units on their passenger trains but they ended up going with the more conventional F7A paired with B units with two steam generators.  The New Haven, under Patrick McGinnis  was determined to rid itself of electric train operation and ended up buying 60 FL-9's between 1956 and 1960.  These units ran on conventional diesel power and also third rail electric power.  The first order also had small pantographs on the roof for operation in Grand Central Terminal.  This was not repeated on the second order. These units were no match for the much more powerful and already established electric locomotives already on the NH roster but poor judgement dictated the decision to go with the FL9's.  They were less than successful and really should never have been ordered in the first place.
When George and I were at the Collinsville RPM meet this spring we attended an excellent clinic on the history of the FL9's given by Rick Abramson.  We also visited a couple of museums that have FL9's in their collection, even one that is used in regular tourist train service at the Railroad Museum of New England in Thomaston, Ct.  There are two others at the Danbury Railroad Museum in Danbury, Ct.

The link to the history of these interesting locomotives is found below.
EMD FL9 - Wikipedia, the free encyclopedia

I must admit I am quite surprised at the number of ex-New Haven FL-9's that still survive today in one state of repair or another.  The first one I ever saw was unit 2007 in Utica,NY which ended her days pulling commuter trains for MTA. It was in pretty rough shape but it has had some work done on her lower side panel this year and hopefully will be restored to completely. The Adirondack RR yard in Utica, NY. is located just north of the CSX mainline/Amtrak station in what was once part of the New York Central's passenger station tracks. 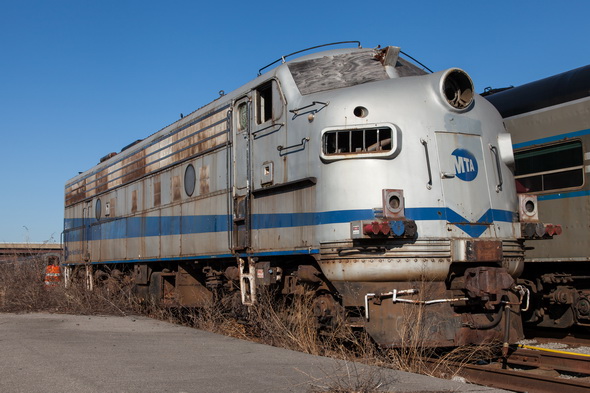 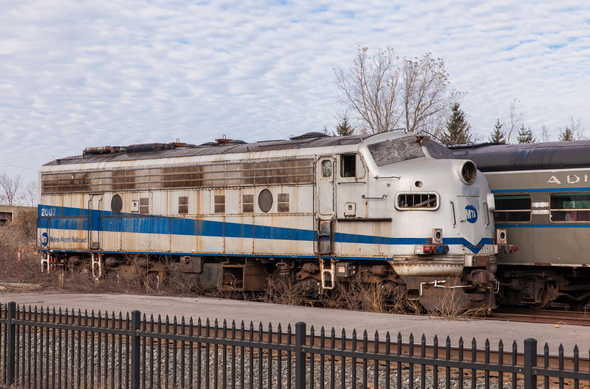 The Railroad Museum of New England in Thomaston, Ct. has three FL9's in their collection.  Number 2002 and 2033 are stored outside. 2002 is still in her original NH paint while the 2033 sports Metro North colours.  Number 2019 has been beautifully restored to her original NH paint scheme and is used on occasion for their weekend tourist train runs.  The day we were there she was inside and not really in a great spot for photos but we manged a few shots anyway. 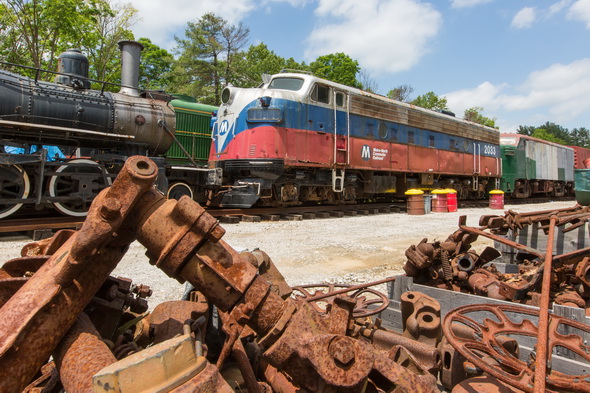 The Hew Haven FL9's are really unique locomotives and have an interesting history.  Only 60 were built, all for the Hew Haven and many still survive.  I know there are more out there including two on the Maine Eastern RR and some stored at New Haven, Ct. so hopefully on our travels we will find more to photograph.
Posted by George Dutka at 10:40