Once George and I arrived in Milwaukee for Trainfest we decided to scout out the pub where we would be having supper on Sat. night.  George said it was located adjacent to the CP Rail mainline and that there was a diamond nearby.  Just as we were pulling up tp the crossing the gates went down, lights started flashing and a CP intermodal train came into sight. Right beside the crossing there was a quiet access road to a local industry and there were several cars parked along the road which we assumed were railfans so we picked a spot and parked the car and watched the train go by.  Once it cleared the crossing it came to a stop. Now, usually when a train stops on double track it means there might be an impending meet so we decided to stick around but nothing happened so we decided to head around the corner and see what was happening on the CN north/south line just north of the diamond. Just beyond the crossing at the end of the double track was a CN freight just beginning to pull. Once we got our shots and the train cleared we headed back to our original parking spot along the CP track. Sure enough, we were not disappointed and several minutes later an Amtrak train flew by at track speed. It had two units and a string of high level passenger cars in tow. 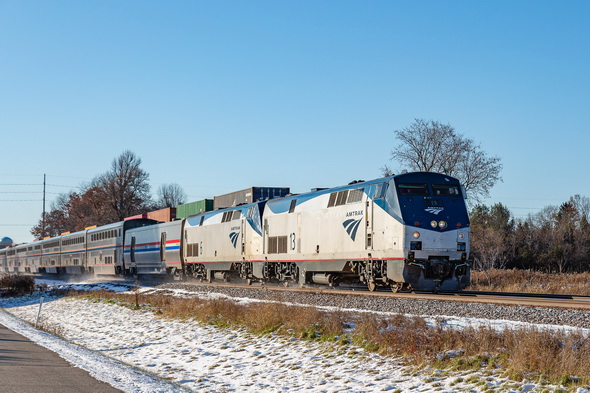 Shortly after the Amtrak cleared a northbound CN intermodal train crossed the diamond so it was back around the corner to get a few more shots. It was another long train with a DPU pushing on the rear.
Once the CN northbound cleared it was back to the CP main.  Again, shortly after we parked the flashers started and the gates went down.  This time it was a CP freight with a CSX GE unit on the point.  These trains really move along on this stretch of track.
What to do now? It was sunny but bitterly cold so we decided to stay in the car and head back to the CN tracks.  Yet another CN southbound was sitting at the diamond.  We decided that instead of getting another shot at this location we would head back to the diamond and get a couple of shots of the CN train hitting the diamond to add a little variety to our photos. We didn't have to wait long until we heard the CN train whistling for the crossing.  It was another general freight with one unit on the point and a DPU in the middle of the train.  At that point the light was beginning to fade and it was getting colder so we headed back to our motel to have a beer and warm up then it was off to dinner with the rest of the Trainfest gang from Canada. it's funny how you travel all the way to Milwaukee and all the trains you see are Canadian, eh! 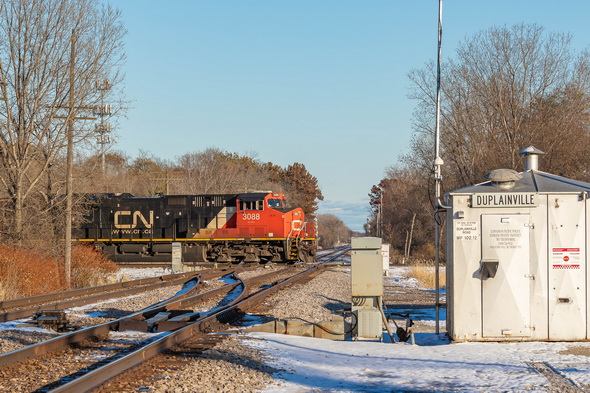