Kevin Smith sent me these two great view of a HO scale diner built by Phil Jordan. It was constructed from odds and ends for a friend's layout. It never intended to be an exact replica, but the influence is obvious. The Miss Bellows Falls Diner is a village icon. It currently is listed as temporarily closed when I checked on-line...thanks Kevin...George Dutka

Some Google information about the diner...The Miss Bellows Falls Diner stands on the southwest side of Rockingham Street, just northwest of the central business district of Bellows Falls. The diner is set parallel and close to the road. It is a barrel-roofed metal structure, 18 by 31 feet (5.5 by 9.4 m) in size, its exterior finished in original enamel panels bearing the diner's name. The entrances to the diner are at its ends, each sheltered by an added vestibule. The kitchen and bathroom facilities are located in a wood-frame addition to the rear. The interior of the diner retains original finishes, including walls finished in enamel panels and varnished wood, a polychrome tile floor, oak booths with Formica table tops, and the main counter's marble and metal finish. The service area also has original features, including enameled refrigerator cabinets and recessed menu boards.

The diner, built in 1941 by the Worcester Lunch Car Company, is the only known intact example of a Worcester barrel-roofed diner in the state. It was originally built for John Korsak and Frank Willie for a location in Lowell, Ma. where it was called Frankie & Johnny's. Both Korsak and Willie were called up into the military for World War II, and the diner was sold to go to Bellows Falls, where it arrived on May 14, 1944, replacing an earlier diner on the site. 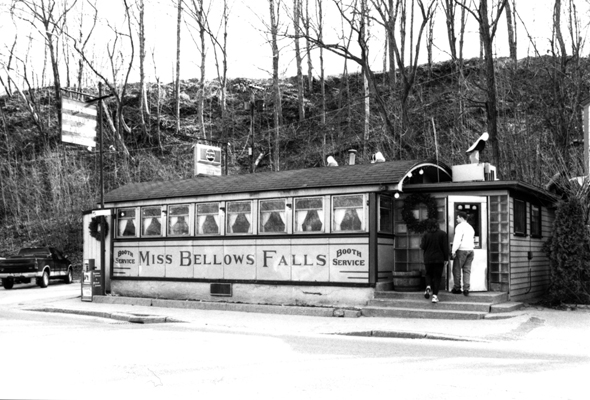