If you get a chance to see or better yet hear one of the new Athearn GP-9 offerings, listen closely as they sound great. They sound just like the real thing. I have two Life-Like Proto GP-9's with factory sound and they do not compare. I can hardly wait for the CV versions to come out.

Don Janes had purchase two of these units when they first came out. On one of my summer visits to Don's we played around with his B&M geep models. I had not planned on purchasing one but after hearing them operate, I just had to have one. If one can't find one in your area try Credit Valley Railroad Co. near Toronto, Ont. were I found a few on hand.

These engines looks great as is, and do not actually need any model work to enter service. But I always like changing things, so I have just finished commissioning B&M 1724 on the White River Division including a few additions. I changed out the couplers with Kadee #58 true scale metal ones, although the plastic couplers included are the same size as the Kadee's. I added a engine man and fireman to the open windows. These side windows actually open and close. I airbrushed  the whole engine with a coat of Floquil flat finish then added some Bragdon weathering. This was added mostly to the lower area such as side frames, couplers, trucks, fuel tanks and steps. I did add light weathering to the filters but I wanted to keep the engine pretty clean as it would have just arrived in my time frame....George Dutka 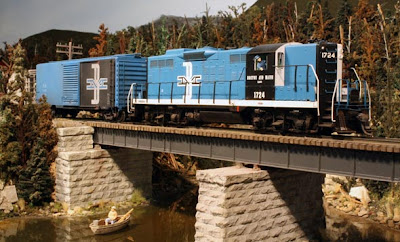 As George has mentioned these new Athearn B&M GP-9's look great and run beautifully right out of the box.  One of the two units I purchased was #1706, a non sound version.  After listening to sound equipped #1724 I decided I had to add sound to the 1706 as well.  Since Athearn uses a SoundtraxxTsunami decoder in their factory sound equipped models I purchased a EMD 567 Tsunami decoder (made specifically for Athearn units) to go in the 1706.  Using the 1724 as a guide it was just a matter of replacing the factory light board with the Tsunami and removing the rear hood weight and adding a 16 x 35 mm speaker and enclosure installed where the weight used to be.  While I was at it I soldered all the wires to the decoders on both units to ensure a good electrical connection.
One other modification I made was to add KaDee #153 scale head short shank couplers in place of the plastic couples that came with the units.  These are stronger and also bring the two units closer together when they are MU'd .
These engines definately need some weathering, especially around the trucks and underbody as the fine detail gets lost in a sea of black paint.  I plan to weather the bodies also but not too much as I don't want to cover up the beautiful paint job on these engines.
Athearn has certainly hit a home run with these B&M GP-9's and bettere still I have heard rumours that they plan to produce Central Vermont GP-9's in 2013.  I can't wait for that official announcement so I can reserve a pair of those engines.  Athearn has sold out of its run of B&M geeps except for ATHG62435, #1706 without sound.
The 1724 and 1706 look and sound great moving freight along the Green Mountain Division.