The Green Mountain Division Gets A New Station....by Don Janes

Although my layout is a freelanced depiction of various locations in Vermont I like to have fairly accurate models of the stations for the towns I model. So far I have models of North Bennington, New Haven, North Dorset and Wells River, all quite accurate models of their prototypes.  Most recently I have added Waterbury to my list of stations.  Back in the summer I contacted Rich Cobb and asked him if he would build a model of the Waterbury, Vt. station for me.  He had done a very nice job on my North Bennington station back in 2000.  He obliged and working from plans and photos he built a nice representation of the Waterbury station.  Once I got it home and compared it to some colour photos I had, I decided to repaint the station a more rusty brown colour and I changed the window colour from white to a light cream.  I also painted the doors black but am still not sure if that is 100% correct.  The large roof overhang at the waiting room end of the station has two large wooden posts  and braces but I removed them for now and will replace them once I get a platform in place and set the station in the layout permanently.

Rich was able to obtain a set of fancy brick trim made by Bernie Kempinski of Alkem Scale Models.  Bernie had made a set of this brick trim for a proposed but never manufactured kit of the Waterbury station.  Marty McGuirk owns the only model Bernie made.  This brick trim looks great and is what really defines this station as being a Central Vermont station.


Once I figure out the exact location for the station I plan to make a form and pour a hydrocal platform and attach the station to it.  There will be two sets of concrete steps at the doors on the street side of the station.
Rich built two chimneys  but one fell off during shipping and I removed the other one for painting the roof.  I will replace the chimneys once the station is ready to be set in the layout.  There are still a few details I need to add such as the train order signal, finial on the tower dome station name signs at different spots on the station.  It also need some light weathering.  I'm very pleased with my Waterbury station and am looking forward to getting the scenery and details around it to bring it to life.  Thanks Rich for building this nice rendition of Waterbury. 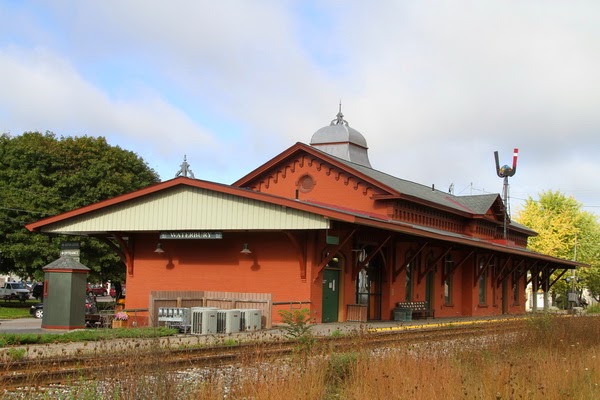