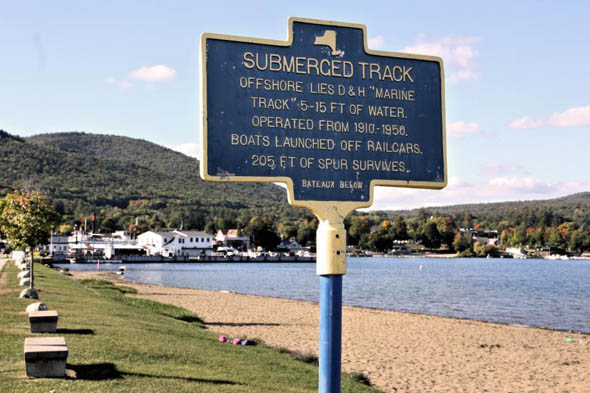 Kip Grant pass along this additional information about the D&H marine track...George Dutka

"Ian Stronach (cc’d) called my attention to the blog photos of the Lake George Marine Track. The marine track was sought by boat owners and installed by the D&H in 1910.  When built, it was winter and the marine track was laid out on the ice.  As it melted, the track settled into the water on a bed that was previously installed.  Boats were delivered for various purposes, including regattas, boats for dealers, and of course, boats for vacationers who could afford such a luxury.

One end of the steel cable was attached to the pilot of the locomotive and the other end, the rail car’s coupler.  The cable went around a snubber post on shore, to create a straight pull with the rail car going into the lake.  This was necessary because the locomotive was on a curved part of the marine track and if there hadn’t been a post, the cable would have caused “string lining”.  The side and more commonly, end doors, were opened on land and the car lowered into the water.  When the water reached the desired depth the boat would be released from its cradle and floated out, started up and away they’d go.

There is some disagreement about how much of the more than 800 ft. long marine track remains.  Railroad documents say that in 1950 674.5 ft. was removed and 135.5 ft. abandoned in place under water. 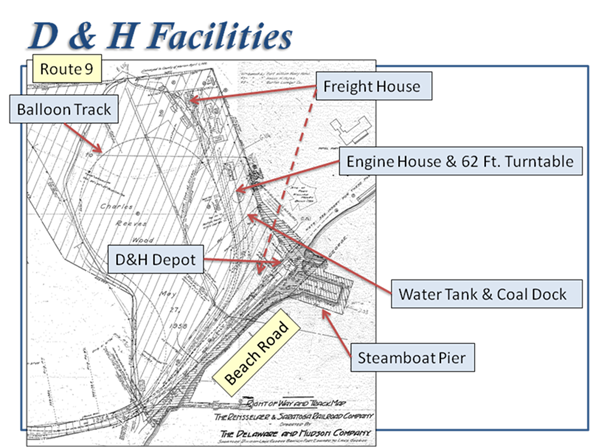 Here’s part of a graphic I’ve used in some of my talks on the branch, showing long-gone railroad features at Lake George (except for the steamboat pier and depot which are still present).  I removed the callout for the Marine Track so that it shows better.  It’s sticking out into the lake at the bottom of the drawing.  I would simply advise your reader when visiting Lake George, to look for the historical marker along Beach Road, just a few hundred feet east of the steamboat company pier.  The marker is at the location where the marine track spur curved out toward the lake.

I was involved in a project to create about two dozen interpretive signs for the Warren County Bikeway, which in large part if the old Lake George Branch.  One of the signs (which includes the photo of the box car in the lake) is located across the road from the historical marker near Fort George Road"....Kip Grant