A Railfan Trip To Pennsylvania and W.Virginia, Day 1...by Don Janes

Every year my friend Carl Massart, who live outside of Pittsburgh, PA, and I try to take a railfan trip somewhere.  I met Carl at Railfan Days at the Cass Scenic RR in W. Virginia several years ago and we have been friends ever since.  Every year since then we have taken a railfan trip somewhere in the USA.  We started out with two trips to Cajon Pass and Tehachapi Loop in California and then the next year we headed for the Powder River Basin in Wyoming to photograph coal trains on the UP and BNSF.  That trip included a trip to Crawford Hill in Nebraska where we stayed in a cabin on the Ponderosa Ranch (no joke, that was the name of it) The reason for staying on the ranch was that almost the entire Crawford Hill helper grade runs through the ranch and it allowed us full access to shoot trains without trespassing on private property.   This year we decided to stick a little closer to home and shoot CSX trains on the former B&O lines in PA and W.V.  and the old Pennsy line up to Horseshoe Curve West of Altoona, now operated by the NS.
We picked Connelsville, PA. as our home base and  stayed in Carl's Winnebago RV at a very nice KOA there.  I will break the trip into three or four separate posts as I get the photos edited.  This post will cover day one on the CSX Keystone Sub which runs between Cumberland Maryland and Pittsburgh, PA. 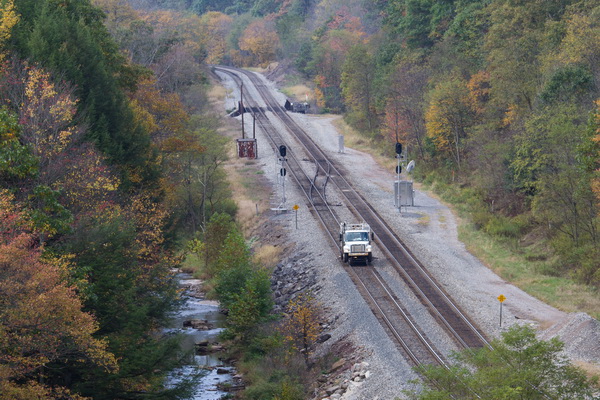 Our first stop was the Foley Overlook, a great spot overlooking a horseshoe curve on a 2% grade.  This line generally sees 25 - 30 trains in a 24 hour period.  The first night we heard a bunch of trains rolling by across the river from the campground and figured this would be a great spot with lots of trains all day.  The weather was supposed to be great so what could possibly go wrong.  Well, see that truck in the photo above, that was just a sign of how the day would turn out.  We sat at the Foley location for about 2 hours and finally a train came trough so we figured things were looking up. Wrong, that was the last train for the next 6 hours and 10 minutes.  A little something called a "work Block" was in effect. 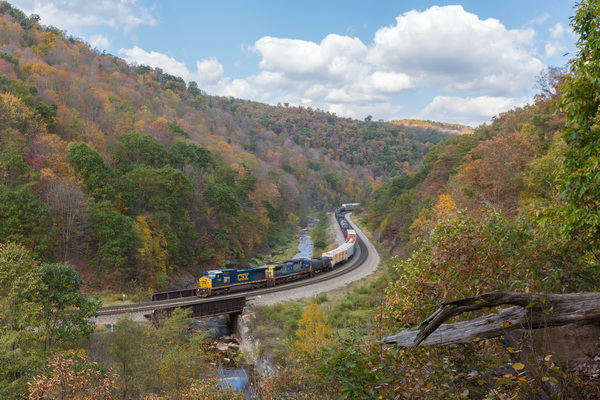 We finally gave up on this spot and headed over to Mance which is located on Sandpatch grade.  At Mance there is the famous Mance Post Office which has been the subject of may railway photos over the years. We actually met the owner's brother who stays in a little caboose shaped cabin on a hill behind the post office and railfans this line regularly. His name is Roger Snyder and he has some great aerial photos on Railpictures,net. He had a scanner and some reliable contacts and informed us there were several eastbounds coming down the hill very soon so we decided to wait for them, hoping they would get there before the sun dropped down behind the mountains.  The fall colours were at their peek here and good afternoon sun would really make the photos pop.  Well, again the railway came through and as soon as the sun dropped behind the hills along came the first train since the morning.  It was an intermodal train followed very closely by a coal train.  Once that one passed the light was gone and we headed back to the RV for cocktails to drown our railfan woes and a late supper. Rain was in the forecast for tomorrow.