Just as the weatherman predicted, Day 2 started out cloudy with some rain.  Our destination was the former B&O mainline between Grafton W.Virginia and Cumberland Maryland known as the"West End".  This line was a pipeline for coal trains and boasted some of the steepest grades in the Appalachians. We decided that we would shoot for trains in the middle section between M&K Jct. and Terra Alta at the summit of Cranberry Grade, the steepest grade on the line at 2.4%.  Due to a wrong turn we arrived in Tunnelton, the junction with an old coal branch and you guessed it, a tunnel which was not accessible to us. After we took a few shots of the nice old station and freight house we headed to Rowlesburg and M&K Jct.  M&K was once the base for the helper fleet and also serviced engines for other locations. At one time there were 30 diesels assigned there and it boasted a shop crew of 60 men.   Helpers worked in both directions shoving coal trains, manifest freights and passenger trains over the mountain grades.  There is an excellent article about the "West End" in Classic Trains special edition Trains of the 1960's.
Unlike the previous day, we arrived trackside at Rowlesburg (where M&K is located) just as the gates and flashers started.  With barely enough time to get the camera ready, I jumped out of the car and got some photos of an empty coal train passing the crossing.  Rowlesburg is where Cranbeery Grade to the east ends and Cheat River Grade (2.1%) starts.  Once the train was gone we scouted out the old M&K Jct. facility, now abandoned and overgrown trees.  At one time there was a coal tower spanning four trackas and various other locomotive servicing structures.
Leaving M&K Jct. we headed east up the mountain to a spot called Cemetery Hill, hoping to catch more train action there.  I don't think I have ever been on so many back roads and trails in all my railfan trips.  Somehow Carl knew his way around and before long we arrived at our destination.  Again, we no sooner parked the car than we saw a set of helpers drifting down Cranberry Grade.  A few grab shots were all we had time for as he was wasting no time, likely headed down to push another train up the hill.  A short time later a Highrail truck passed us heading downgrade and the employee told us there would be another train in about 45 minutes so we decided to wait.  This line sees only a fraction of the traffic it once saw so we went with the sure bet and waited. Forty five minutes railroad time equated to about an hour and a half real time but sure enough along came another train grinding up the hill.  The helpers were the same set we saw heading down a couple of hours ago.
Once the train passed Cemetery Hill we jumped in the car and raced up the hill another few miles to Terra Alto, the crest of Cranberry Grade.  We figured by the slow speed of the train we could likely beat him there.  We did but not by much.  At Terra Alta the track runs right beside the street and is a good location for a shot of the train cresting the grade.  You can see from the following set of photos just how steep a 2.4% grade is. 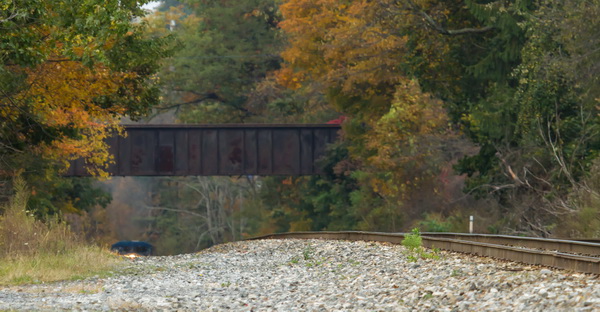 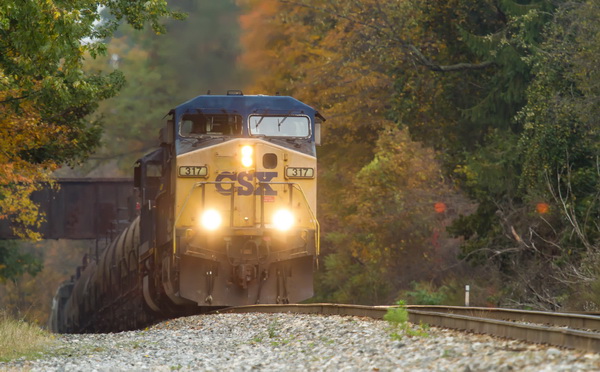 After watching the train at Terra Alta we decided to catch it at one more spot before heading back.  Carl suggested Oakland, Md. so that's where we went.  Oakland is a very nice little city with lots of tourists and street markets.  After finally getting a parking spot we headed over to the beautifully restored brick station.  All the remaining B&O stations I saw were in excellent condition and being used as other businesses today.  I decided to get a shot from the opposite side of the tracks from the station to get the train and station in the shot.  At this point it was starting to rain harder but the old style B&O block signal was green so I knew it wouldn't be long until the train arrived.  I was already wet so a little more rain wouldn't hurt me now.   Finally our train arrived and we got our shots.  It was time to grab a coffee and head back to Mance to see if we could get a few more shots there before calling it a day and return to the KOA in Connelsville.