After we left Oakland, Md. we decided to give Mance another kick at the can.  It continued raining off and on but since Mance was on the way home why not try it.  On our arrival we were met by Roger Snyder who informed us there were several trains in the area and that the first would be a westbound manifest.  He no sooner said this than we heard the rumble of GE units working uphill coming around the curve.  Not wanting to miss the shot by re-postioning I decided to stay right at the post office and shoot from there.  It was good thing too because this guy was really haulin" and I barely got the camera out when he was on us.  To my delight the leader was a BNSF unit that really popped on such a dreary day.
Not long after that train cleared an eastbound auto rack train drifted downhill by the post office.  I thought I'd try a different angle so headed east of the post office and found a mound of ballast to climb up to give me a little elevation.  No sooner had I got up there the rain started pouring down but at this point it was too late to move so I decided to bite the bullet and get a shot from there than miss it completely.  I wish now I had stayed under the porch and shot the eatbound from the spot I shot the photo above.  It seemed as though our railfanning luck was beginning to change and our enthusiasm started to return.  All we needed now was a couple of sunny days.
Aftere the auto rack train passed we decided to take the farm trail to the top of the field overlooking the Mance Post office.  From here we could see the "S" curve on the right leading down from Sandpatch Tunnel and around the horseshoe curve heading off to the east on the left.  Once in postion we only had to wait a few minutes until another eastbound manifest came snaking down the grade.  This train had 8 units so it made an impressive showing as it passed the post office.  To our surprise there were also two sets of two brand new commuter cars on the tail end.  I don't know where they were headed but they looked like they were for an electrified line, likely somewhere on the Northeast Corridor.  Not bad, three trains in one hour.  Once this train passed we packed up and headed back to the KOA.  Not a bad day for train watching. 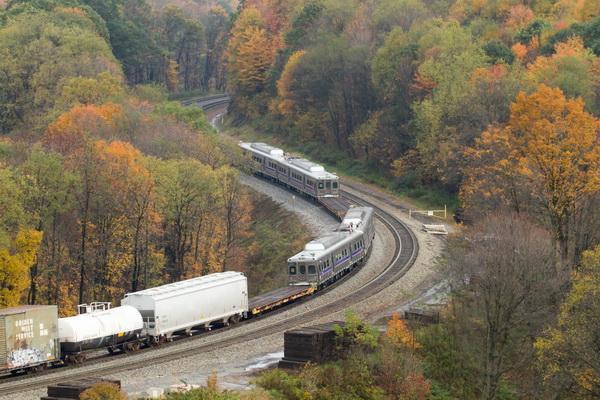