After the weekend post about modeling a storage tank car two friends had sent me some prototype photos for more inspiration. I have offered Brian his finished car back as I think I will build another version.

Ian Stronach  comments, "I thought you would be interested in the attached photos of rebuilt tanks cars, prompted by your post.. These three, off their wheels, CPR service tanks cars were adjacent to the steam plant at the roundhouse in St. Luc Yard in the mid-1980's.  Based on the COTS plate they were installed after 1976 as they weren't there when I used to regularly visit in the 1960's.  I do not know for sure what they were used for, but given the little building beside them, which likely is the pump house, they could have been used for used and contaminated lube oil and fuel for firing the boilers"


Kevin Smith comments "enjoyed your recent post of the tank car storage facility. Attached pics of similar facility for fueling locos on ARZC. (Nothing new here; just another example). The tank was originally an ATSF water car. Santa Fe carried water from Barstow, CA to many stations East towards Needles. (Desert water was deep & very brackish). The local we I/Cd actually still served Amboy, CA  with water cars once weekly up until 2013 or so.
The ARZC fuel car sat in a containment dike made from cinder blocks. It was placed on a piece of rail covered with absorbent lining. Fuel was always brought in by truck. About a year before I retired, the whole thing was pulled out & scrapped in favor of a modern & environmentally Safe set up."

Thanks guys for sharing. There will be another post later today...George Dutka 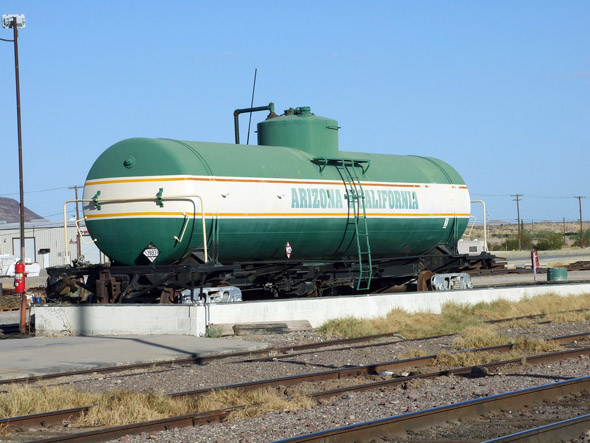