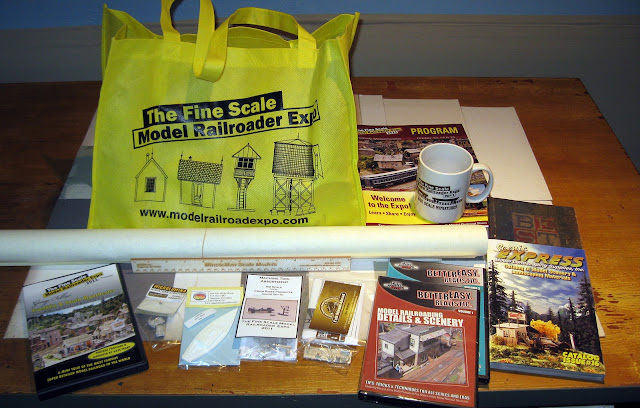 Checking out the Dealers...
The dealer-contest room opened at noon the day I attended the Expo. There actually were two rooms of vendors and a third small room that you could see how a kit was made. This room was called the Kit Factory. It was a rare opportunity to seen first hand how craftsman kits are manufactured. Metal spin casting, resin casting, mold making and laser cutting was demonstrated. The kit makers were busy answering questions when I walked through...not something you would normally see at a show, but it did give me a good insight to what is involved.

Almost all the dealers had finished display models. Some dealers also had part built kits which gives you a good idea what is involved during construction. Along with the structure vendors a good amount of building detail parts was available from vendors such as Northeastern Scale Lumber Co, Tichy, and Sylvan Models to name a few.

When I registered at the front desk I was given a yellow bag loaded with flyer's, booklets, videos and scale rulers. There also were coupons in the bag to get free stuff when visiting the vendors tables. Well some of the freebies had $20 price tags on them. When you finally collected all the goodies up your bag was over half full...think they wanted to leave some room for the kits you buy in the bag. I think there was at least $100 worth of modeling details and kits. I have included a photo of my stash laid out when I got home. The DVD's I received were one from FOS scale Models and the Expo layout tour video of George Sellios - Franklin and South Manchester RR. Registrants all got to visit George's layout at designated scheduled times. Visitors were not allowed to take photos, which was a good thing because that would take away from the experience.  George was at the door to greet you and welcome you in. What a great layout to visit, one of the highlight of my weekend.

There were a lot of dealers, too many to remember them all. But I do recall the sponsors of this event, BEST, FOS Scale Models, RailroadKITS and Atlantic Scale Modelers. I put my pocket Canon camera to work recording some of the models that interested me. Some I have kits of already and was interested in a few detailed photos to work from. Other photos I took were of models I am considering building and some were just nice kits to look at. Well here is a small selection of what I saw...or as I should call it "the dealers kit premier".