What was once old is new again...

Peter Mumby showed up the other day for our afternoon kit building session. We are working on the RailroadKITS seed house. Anyhow he had a couple 1960's vintage wooden kits with him in a small box that have seen better days. He thought I could use the bashed up cars as loads for one of my gondolas or as a RR pit site. Peter just could not throw them out. I did not need either but I said I would take a closer look at them later on.

Well I kind of liked the black old time drop bottom gondola. It had some nice lettering on it also. This car probably will not operate on my layout as it is from the 1920-30's era. It would look good though on my HOn30 Maine Two-Footer transfer yard diorama. I was thinking limited details only needed to be added. Being a static model the car did not even have to roll well and probably would not being so light.

The wooden hopper was a mess although it had parts on it the other kit was missing. I decided I could save the gondola...but only if it did not take a lot of time. I gave myself an hour. If it was not ready for repainting and weathering it was out of here. I had some paint jobs planned for that day. I took the brake wheel, rod and chain off the hopper along with the one end panel that the gondola was missing. I cut and glued the new end on, added the chain and wheel. I used an old set of Roundhouse trucks, Kadee  mounting screws and some old Life-Like couplers that are similar to Kadee's. Did not need to waste my good couplers since the car was not going to run anywhere.  The trucks needed a Kadee washer to set the height right. The gondola sides needed some extra glue and support. I used Walther Goo to hold it together. Some stake pockets and stakes were missing, but the hopper had the exact type of pockets and stakes. These were removed and added. The last detail added were new Grandt line stirrups since not all were on the car and the ones still hanging on were tough looking and over scale. I looked at the clock and one hour had expired. I did give it the extra few minutes to get the stirrups added. The total rebuild took 1hr 15 min.


I used Floquil grimy black to paint the under body, interior and any area that had new parts added. The rest of the car got a light dusting of grimy black also...just to freshen things up. It toned down the letting a bit and would hide some of the missing areas of lettering. The car looked great by now. The last thing was some chalk weathering, white, rust and earth. I added some Woodland Scenics  mine run coal to hide some of the ugly stuff inside the car near the corners. 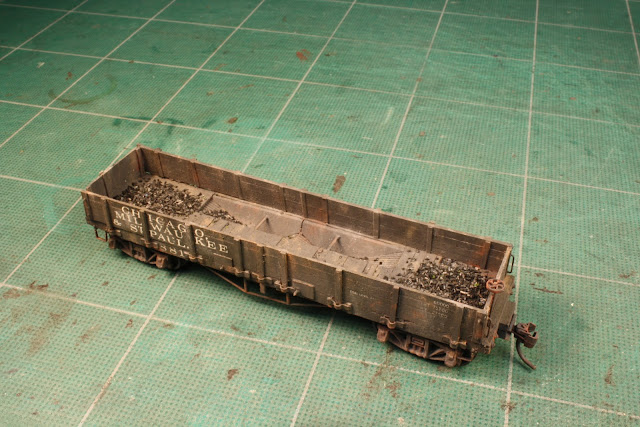 On our next modelling work day I showed Peter the finished gondola. He now wants his car back...good luck!
Posted by George Dutka at 15:54