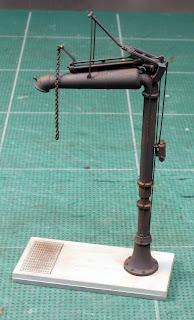 Adding a Tichy Water Column...
At the Central Vermont White River Junction coal tower there was two water columns. They were both on the north side of the tower, one between the two tracks running under the tower and one on the outside rail by the roadway. I decided to add one water column to my staging track scene. I used a Tichy Train Group  Kit #8006 which is a copy of the Fairbanks, Morse flexible spout. A commonly see structure at shops and stations.

The kit was very simple to build and cheap at $6.00...plus I had it together in one evening. There are a lot of little wire rods that need to be attached. These I applied a touch of Walthers Goo which gave me the flexibility to add them all at one time. The instructions are very good and easy to follow. The only addition I made was a short length of chain which is not included. My column is painted Floquil grimy black and the base Floquil concrete. I added some chalk weathering. Rust on the column and black and brown on the base. It was attached with Walthers Goo to the scenery and a few weeds are added. A water spout is a quick and simple detail that adds extra interest to the finished scene.

I published a group of CNR data-packs back in the late 1990's. In DP No. 2 I include a bulletin order that was posted each spring during the1950's as a reminder of birds and their nest building habits. It reads:

"At this time of the year birds are liable to build nests in the water spouts at various points. If these bird nests are flushed into the tender when taking water it could block the strainers in the waterways to  the injectors or water pumps, and could cause a delay or failure.


It is suggested that when taking water, the fireman should, after pulling the spout around, operate the lever sufficiently to open the supply valve enough to flush out any nests that might be in the spout before the same is lowered into the tender. This applies particularly to any spout which might not be used frequently."