On Memorial Day (last Monday) it was a ho-hum day trackside with nothing actually passing by me. It was more cloud than sun while hanging around the Komoka detector. VIA 72 did pass but no CP WB that morning. I heard dispatcher call CN 397 telling the crew they would be re-crewed at Watford West. The train appeared a few minutes later at a good speed. To my surprise the middle unit was a CN military tribute unit as seen in my photos. I decided to head to Watford West for a better shot and a good look as the train would stop and pull slowly at the crossing. On to the freeway 402 then back on Kerwood Rd. I could see it had not gone across the crossing here yet so a quick trip into Kerwood for a shot. The gates just started as I crossed the crossing. A couple of shots there and once the train cleared off to Watford West. I got my best look and views at Watford West as the train pulled slowly over the crossing.

It was nice for my first encounter with a military tribute unit  to be on Memorial Day. CN 397 later in the day arrived in Pt. Huron Michigan for a run west on the GT...George Dutka 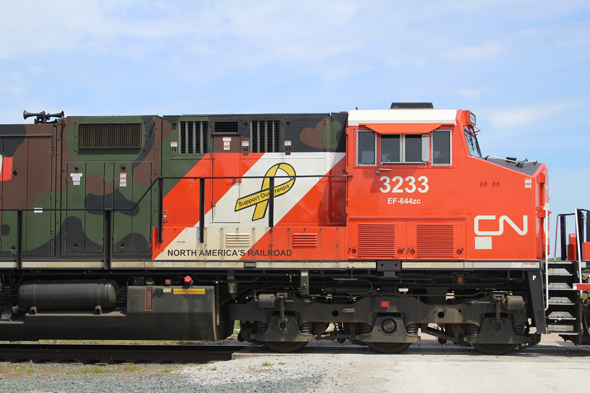