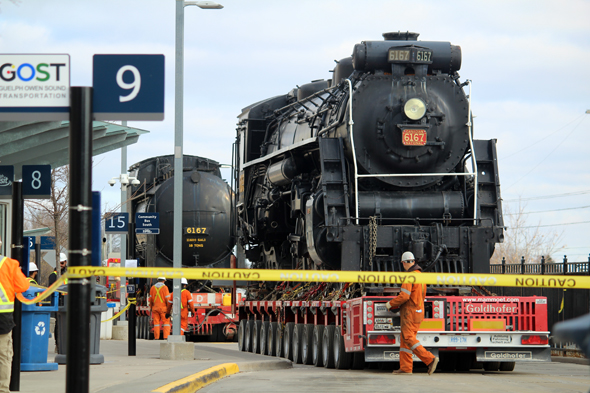 On Saturday Nov. 14, 2020 was moving day for CN 6167 to John Galt Park a short distance away. The engine will be easier to view than at the past location. 6167 has been near the Guelph, Ontario station since a move in 2014. The total cost of the prep and move was budgeted for at $650.000 and the work was done by Puslinch-based Mammoet. The engine was gifted to the city of Guelph by CN in 1967 in honor of Canada’s centennial. This will be the third location the engine has been on display in the city. Mammoet had spent the last week getting the engine and tender loaded and secured for the November 14, 2020 move.

I spent part of the morning watching the engine move over the CN main line and onto the roadway leading to its new home. There had to be at least 100 spectators in the VIA lot and on the street. More were on rooftops and across the main line. Speaking to my father-in-law about the engine's move he noted that he was part of the engine crew that handled 6167 over to Guelph in 1967...George Dutka