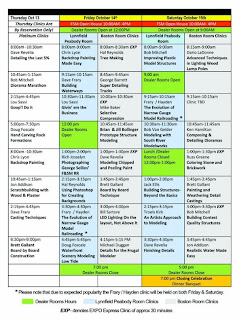 There were a lot of clinics at the Fine Scale Expo and I took in as many of them as I could. I found it hard to choose since there was two going on at all times across the lobby from each other. Once I decide on sitting in on clinics by Dave Frary and Lou Sassi I just got a front row seat in the Lynnfield - Peabody room and spent the morning. Beginning the day was a very interesting backdrop painting clinic by Chris Lyon. He uses only black and yellow which when combined makes some great looking greens. At the end he gave away the backdrop to one luck guy...hope he was not flying home though.

Dave Frary HOn30 Maine two foot modeling I have followed and loved for years. I also have his scenery books which is very helpful. I had to watch his waterways clinic and meet him. He also has a blog that you can check out by looking in my profile for the link. He is way behind blogging but anything he writes is well worth reading. His clinic was very interesting and I learned a new trick for building waterfalls.

Lou Sassi did his clinic on his most recent book which covers modeling businesses and a working farm scene. He brought along one of the modules he used in his book. I had seen this module when I visited Lou when he still lived in New York state. Don Janes who is a good friend with Lou would always plan a visit with Lou when we travel together. So is was nice to catch up with him since he now lives down south.


I missed a lot of good clinics that I would have loved to see but I wanted to check out the contest models, the dealers and George Sellios layout. I actually skipped lunch to get the whole day in and had a very late supper. I got back to the clinics half way through Hal Reynolds photo shop backgrounds. I am not that good with the computer yet but was impressed to see what he has done.

Once again I had a front seat to see the Hayden and Frary Evolution of Maine Narrow Gauge RRing. As a part time Maine Two Footer this was the highlight clinic for me. Two of my favorite authors telling their story. It can't get any better than that. The slide show presentation was great. Was disappointed to hear the C&DR which lived in Dave's basement for years was washed out by a flood that filled his basement to the rafters some years ago. He did mention saving what he could.

I did take in most of Doug Foscale Waterfront at low tide but by 530 I was starving and off I went. I learned a lot from Doug about the water affects on stone and piers.

That was all I could get in during a busy day. That was only a quarter of the clinics that would run over two days. Maybe at Expo 2012 they will run a few of the same clinics so one can see what one missed this year. Oh well, a great show that was well worth the visit even when I had one day to do it all. Expo 2012 is already in the planning stage and will be in Pennsylvania near the rail museum.