Not long ago while sorting through boxes of model railroad stuff I came across an old Walthers Scale Test Car kit.  I thought that this would be a good two or three night project so started looking on the internet for information on CN scale cars. I found one Blog that George follows, Trackside Treasure by Eric Gagnon (http://tracksidetreasure.blogspot.ca/) had a list of all CNR Scale Test cars and a good colour photo of one of the cars from the 1950's, perfect for the period I model.  I also posted an inquiry on the Yahoo CN group and got some great model and prototype information from Bill Dewar of Brampton.
Scale Test cars were used to calibrate weigh scales, usually at larger terminals, where a lot of cars were weighed after being received from customers. Here in Sarnia where I worked we used to weigh  a lot of tank cars from local refineries. Sometimes we would spend a couple of hours weighing a string of cars.  CN had several variations of Scale Test cars, some very similar to the Walthers kit. When finished at one location they were coupled next to the caboose on freight trains and shipped to their next assignment.  These small cars had no air brakes, just an air line so operating rules stated that they must be handled next to the caboose on freight trains.  Operating crews always hated getting a Scale Test car on their train because they had a speed restriction of 25mph, which added a lot of time to a trip.
I decided to add a few extra details to my car and replace the molded on grab irons with wire Tichy grab irons.  I had a pair of Proto 87 scale wheel sets on hand so I used those. The treads are much narrower than regular HO scale wheels and since the car is so small they look a little finer.  Some cars had Ajax brake wheels so I added one using a Details Associates brake wheel and scratchbuilt the brake housing from styrene.  The kit included a plastic casting for the railing down the middle of the car but it didn't fit right and was a little heavy so I made a replacement from .0125 phosphor bronze wire from Tichy.  KD #58 scale couplers fit perfectly in the coupler boxes. The cut levers are from Detail Associate and the air hoses are KD parts. 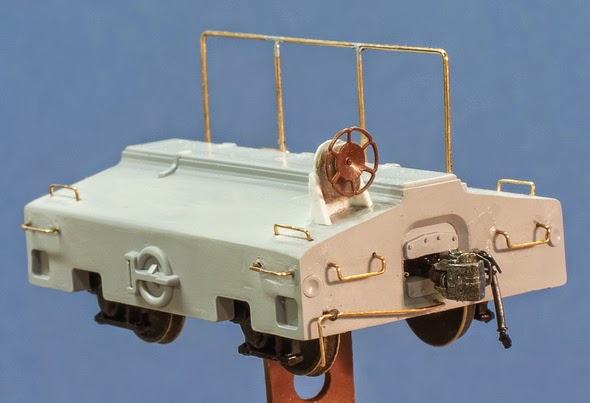 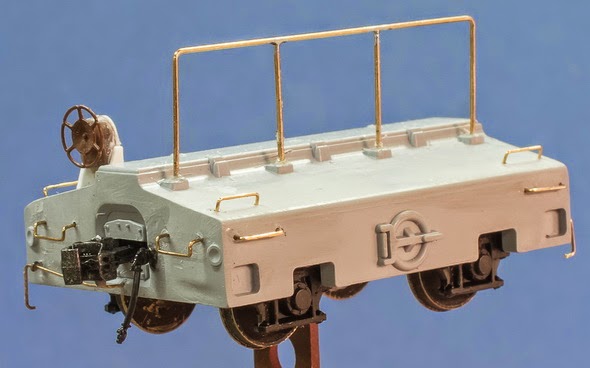 I wasn't really sure what decals were available to do this project.  Bill Dewar's reply to my Yahoo CN group inquiry solved that problem.  Bill had done a brass Scale Test Car in CN colours and he supplied me with a nice prototype photo and a list of decals he used and a photo of his model showing the placement of the lettering on his model.  He used an N scale set of Microscale CN wood caboose decals (60-1033) for the road name and a couple of other bits of lettering.  For the other lettering he used decal set No. 1042- CN Scale Test Car from Andy W. Scale Models. (www.readytrain.com, then click the Model Centre tab, then Andy W Scale Models Decals and the list of decals comes up). Although made for the later orange scheme most lettering is good for the earlier version.  I might add that Andy W. also sells some nice HO scale parts.  I purchased a set of  resin RS-3 sides which are correct for Canadian RS-3's and are a replacement for the Stewart kit sides. 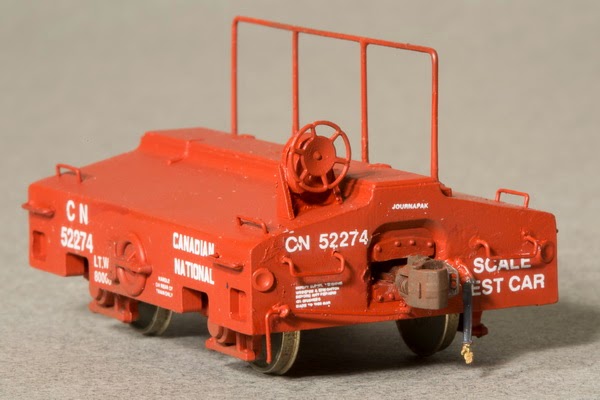 Once all the details were added I painted the car with Scalecoat CN #11 mineral brown from the CNRHS.  As can be seen from the above photos I lettered the car with the decals from the sets mentioned above.  Once dry the car got a coat of flat finish and a bit of light weathering around the running gear. Although not an exact match because some lettering just isn't available my finished model is a close rendition to a CN Scale Test Car.  These are neat little cars and make a nice addition to your rolling stock roster.