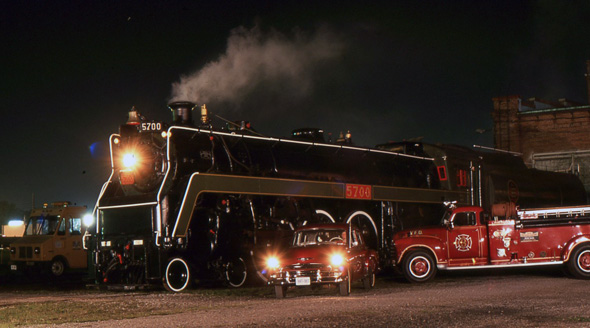 St. Thomas, Ontario, refers to itself as The Railway City.  Google "Railway City Tourism" and you'll learn a lot about the mid-sized city.  The moniker, however, is based more on a past, rather than a present, reality.  Since 1856, more than 25 different railways have run to or through St. Thomas.  The railfan of the 1950s could, within the space of a few city blocks, see trains from CN, CP, Wabash, C&O, NYC (CASO), and witness the  electric operations of the London and Port Stanley Railway.  Today, the CN Talbot Spur hosts one nocturnal turn per day, and Ontario Southland visits town several times a week.

The major route through St. Thomas for most of its railway history was the Canada Southern (CASO), operated by Michigan Central/New York Central.  In 1985 the CASO ( by now the Canada Division of Conrail) was sold to a consortium of CN and CP interests.  Assets were gradually sold off, removed, or abandoned.  The 1913-built Michigan Central Railroad Locomotive Shop was taken over in 1988 by the fledgling Elgin County Railway Museum.  It developed a nice collection of equipment and memorabilia, but the star of the show is definitely CN K-5-a Hudson 5700.  This locomotive had been built as 5703 in 1930.

In the early days of the museum, CN still had limited operations on the trackage just to the north of the building.  Donated equipment could arrive by rail, and visiting units could appear for the Railway Heritage Days held in May and August.  Along with the outdoor displays, a model train display and sale was held inside the building.  A deteriorating roof gradually curtailed the size of the indoor displays, and the removal of CN and CP trackage eventually left the museum land locked.  Visiting equipment no longer appeared, and the Railway Days show disappeared from the railfan's calendar.  The museum is still very much in business, but displays are now limited to the collection on hand.

For two or three years, while the Railway Days show was still in existence, night photography sessions were held for the benefit of local rail buffs.  Opportunity was provided for photos to be taken of each of the locomotives on outdoor display.  On the warm evening of August 21, 1999, CN 5700 posed for this particular image.
Posted by George Dutka at 08:14