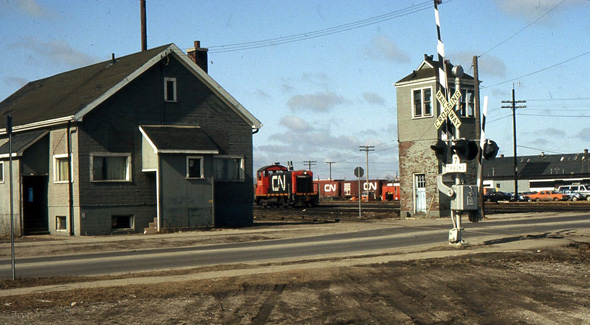 This photo, looking across Egerton St. in March of 1983, amply illustrates the many changes to the railway scene which are the hallmark of this "Throwback Thursday" series.  London East is located at MP 76.5 of the CN Dundas Subdivision which cuts left to right through the centre of the picture.  To the right (east) of the photographer is London Yard; to the left is the RIP track and the carman's office.  Further west is the Rectory St. locomotive facility.  The downtown CN London tower and depot is situated at MP 78.2, which is also MP 0 of the Strathroy Subdivision.

All of the structures visible in this scene have disappeared; the crossing tower is long gone, and the yard office has been replaced with a more modern building located north of the double track mainline.  The roof at the upper right belonged to one of the remaining buildings of the London Car Shops; three decades earlier workers at this facility were busily repairing passenger cars and converting old boxcars into wood-sided cabooses.  Today this whole area is part of the Western Fair complex.

Other relics of the past visible in this image include a CN end-cab switcher, orange coloured maintenance vehicles, and the cross bucks with the spelled out "railway crossing."  Also, notice that the cross arms wear the older black and white paint.  A later October 1987 photo shows these arms painted in the current red/white colour scheme.

North of the mainline we can see several 40' boxcars parked on storage tracks which have subsequently been removed.  Slightly beyond these boxcars is London Junction (MP 76.7), the place where the Thorndale Subdivision curved away towards Stratford and Kitchener.  At this time this trackage was under the jurisdiction of the CN London "K" dispatcher.  Today this part of the line is supervised by the London yardmaster and is the connecting track to the Goderich Exeter Guelph Subdivision.
Posted by George Dutka at 15:36