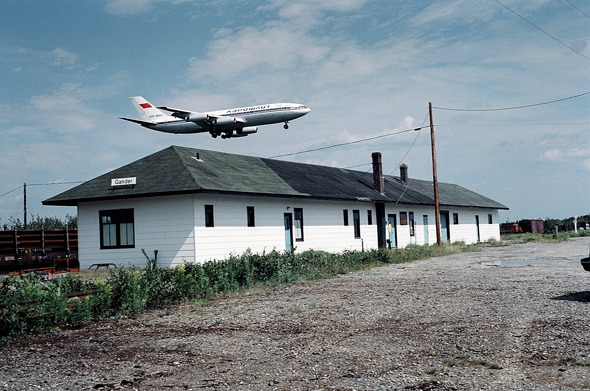 Post 9/11, Gander has become world famous for its airport and the incredible spirit and generosity of its citizens.  The hospitality extended to the hundreds of stranded visitors following the closure of US airspace, of course, led to the creation of the award-winning musical "Come From Away," which is described as being " the remarkable true story of the small town that welcomed the world."  However, this was all far in the future when I landed in Gander on August 12, 1988 to begin a short railfanning visit to CN's 42" gauge descendent of the Newfoundland Railway.  This was the closest airport to Bishops Falls, the site of a division point yard and the terminal point for the last remaining mixed train operation on the island.

A close inspection of this photo will reveal a line of company service equipment on the far side of the structure.  My railfan photography commenced with a few of these rail cars.  When I heard the approaching aircraft, I decided to back away and include this other symbol of Gander in my image of the station.  Zoom in on the plane itself, and the use of the Cyrillic alphabet on the fuselage indicates that this aircraft was probably using Gander as a refuelling point on a flight between Russia and Cuba.

My actual trip on westbound train 203 between Bishops Falls and Cornerbrook began on August 14, 1988.  By this time the local station was basically being used as a bus depot.  Indeed, the ticket I purchased was labelled "Roadcruiser Ticket," with special instructions "train use only."  The return train from Cornerbrook was scheduled to get back to Bishops Falls in the wee hours of August 15.  The cost was $19.00 each way.

Hauled by NF-210 number 937, train 203 left the yard with only the passenger equipment and van in tow.  At the Windsor/Grand Falls stop a couple of container flats were lifted to complete the consist.  Return train 204 was a heavier affair, and rated two units, namely 944 and 936.  All three of these diesels were decorated in the then-current TerraTransport livery.

My August 1988 visit was relatively short, but left a lasting impression.  The last train ran about a month and a half later, and rail lifting began in October.  By November, 1990, the entire railway had been dismantled.
Posted by George Dutka at 08:24