I got a bit of a blast from the past while visiting Montreal last month. I went into a camera store in old Montreal and found a scene I had not seen in over a decade. A variety of 35mm film behind the sales counter. As I walked around the store there was everything one would need for developing the film, paper and so on. I have saved my 35mm camera but I am not sure I will be going back to using Ilford and Kodak products. I was surprised to see the return of Ektachrome. Another slide product I noted that is available on line when I checked is RetroChrome. 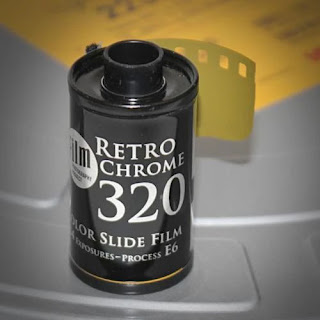 Film Photography Project RetroChrome is government surplus high speed Eastman Kodak Ektachrome color positive film. Made for industrial and governmental applications, Kodak adds “it is color reversal camera film that is intended for photography under daylight illumination. Among its many applications are news photography, sporting events and industrial photography.” The film is cold-stored, 2004 expiration. The film performs excellent at it’s intended box speed of 400 iso which leads us to believe that this film has been stored in the “deep freeze” for the past decade.