I was watching a MRH video, Sept 2019 What's Next when I saw Dave Scharnhorst's layout which Don and I saw at Trainfest. This reminded me that I had planned on sharing some views of his layout. It is called the MZ&D named with his son's in mind. Called the Matt, Zak & Dad layout it is a 60' long HO scale loop that is two scale miles long. The average width of the modules are one foot and the whole layout fits in the back of Dave's pickup truck. Now that is quite a feat. It has some neat animated scenes that are worth checking out in the video. Being children friendly the height is set at 36". The layout is now about 27 years old and has been to 84 shows. It really does not show its age...George Dutka 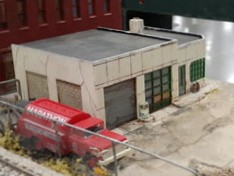